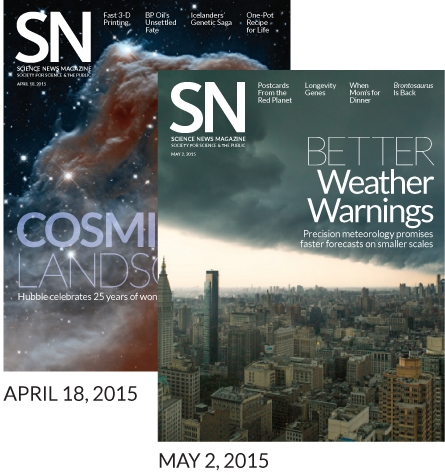 Neandertals knew how to accessorize. Eight 130,000-year-old eagle talons unearthed in Croatia show signs of being strung together and worn as a necklace or bracelet, as Bruce Bower reported in “Cache of eagle claws points to Neandertal jewelry-making” (SN: 4/18/15, p. 7).

“If the Neandertals made string, what would they have made it out of 130,000 years ago?” asked Mark S. Other readers had suggestions: “A dried strip from the long tendon of any deerlike animal would have been both very strong and very thin,” wrote Robert Stenton. “And while Neandertals only died out about 30,000 years ago, I am sure that such use of the tendon went back much further in time.”

Science News marked an important milestone in astronomy with “25 years of Hubble” (SN: 4/18/15, p. 18). Online readers joined in the celebration of a quarter century of awe-inspiring images from the space telescope. 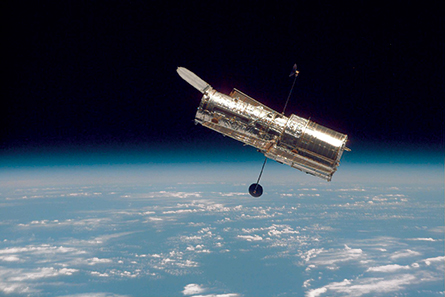 “I’ve used many of Hubble’s pictures when teaching fourth-graders science to show just how massive and awesome the universe is!”
– @steel_hammer1 on Twitter

“Hard to believe it’s been 25 years. Congratulations, happy anniversary and most of all thank you to everyone involved with this amazing piece of equipment.” – Cataccord on the Science News website

Tony Cooley thought rawhide strips might do the job. “That would be a plausible alternative to forming string by twisting together plant fibers. I don’t know whether a rawhide strip would rot away without a trace in the environment in which the claws were found. It would probably be more prone to degradation than a string made from plant fibers.”

It’s hard to know for sure what Neandertals used to string together the newly discovered eagle claws, Bower says. Anthropologist Bruce Hardy of Kenyon College says that Neandertals probably made string or cord out of reeds, rushes or similar plants nearly 90,000 years ago at a site in southeastern France. Neandertals elsewhere in Europe or the Middle East might have used tendons or other material to make string, snares and nets. Few remains of ancient string or cord have been found.

A reason for resin

Solid objects rise out of a pool of liquid resin thanks to a new 3-D printing technique. Beth Mole described the process, which works faster than current methods, in “Superfast 3-D printer constructs objects from goop” (SN: 4/18/15, p. 6).

Readers were wowed by the new technology. “This invention is an absolute marvel,” wrote Dave Bowman on Facebook, and many others agreed. “Amazing!” exclaimed commenter wooter, adding, “this seems to only apply to resin-based 3-D models, though. I assume that 3-D models using metals will still be created the ‘old-fashioned’ way?”

While other 3-D printing methods can use metals, this new technology relies on polymers, says Mole. The technique hinges on resins that form hard polymers in the presence of carefully controlled ultraviolet light and oxygen. However, the researchers do note that the method works with a range of resin types, including those that can produce 3-D objects with enough strength and heat resistance for use in automotive parts.

Just in time for Mother’s Day, Susan Milius wrote about a spider species with very dedicated moms — so dedicated that a female liquefies her organs to feed her spiderlings. Read all the grisly details in “When mom serves herself as dinner” (SN: 5/2/15, p. 4).

The story provoked a mix of reactions as readers tried to decide whether the spider’s motherly sacrifice was heartwarming or just plain gross. “I don’t know whether to shudder or cry over that. It’s so chilling and touching all at once,” wrote Mark. On Facebook, Trina Hoptowit was less conflicted: “Just makes my skin crawl! Poor mother!” Justin Gosnell wrote, “I found that to be depressing. I need to call my mom.”

Other readers saw an opportunity for black humor. “Brings new meaning to ‘You’re eating me out of house and home!’ ” joked Tim Donahue. A couple of people pointed out parallels between spider and human behavior: “I’ve seen human kids like that, sucking their parents dry, seemingly at the parents’ invitation,” Jan Steinman quipped.

A caption on Page 18 of “Water, water everywhere” (SN: 5/16/15, p. 18) incorrectly referred to hydrogen molecules. It should have said hydrogen atoms.