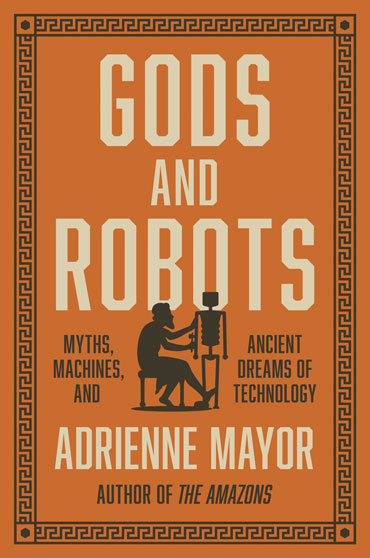 Artificial intelligence and robotics are hot scientific fields today. But even in the brave new world of AI, there’s nothing new under the sun, writes classics and science history scholar Adrienne Mayor in Gods and Robots.

In a breezy and thought-provoking account, Mayor describes how ancient Greek, Roman, Indian and Chinese myths expressed hopes and fears about human-made life long before conversational robots and computer chess champions flexed their algorithms. Mayor argues that myths influenced, and were influenced by, real animated machines invented by ancient engineers.

Many Greek myths focused on what Mayor calls biotechne, or “life through craft.” Consider Talos, a giant bronze robot in the epic third century B.C. poem “Argonautica,” which tells the story of Jason and the Argonauts. Hephaestus, blacksmith for the gods, created the automaton Talos to guard a kingdom on the island of Crete. When Jason’s crew arrives, Talos breaks rocks off a cliff and heaves them at the sailors. When the sorceress Medea fixes a disorienting glare on Talos, the giant stumbles, cuts his ankle on a rock and, in a sense, bleeds out. A single internal vein carried Talos’ life force, a substance called ichor that in Greek myths granted immortality to the gods.

Talos’ tale demonstrates how the Greeks used biological knowledge to inform myths of manufactured beings and to ponder a future in which technology could produce artificial life. Talos’ anatomical weak point was chosen for a biological reason, Mayor argues. Ancient medical texts on bloodletting procedures describe a thick ankle vein as best suited for draining blood from patients. In early versions of the myth, a nail in Talos’ ankle sealed in the fluid that animated his body.

Other parts of the book recount how Greek myths imagined robotic servants and a beautiful but deceitful artificial maiden programmed to unleash disasters on humankind. Her name was Pandora. She offered a warning about the dangers of life that’s “made, not born,” Mayor writes.

Mayor also explores accounts of actual self-moving machines. Egyptians, for instance, created a seated female statue that stood up, tilted over to pour milk from a vessel and sat down. Gears, weights and other parts may have moved the nearly 4-meter-tall figure, known only from a description.

As Mayor explains, ancient civilizations told tales of a conflicted desire to transcend death and create artificial life. Those same longings inspire some of today’s humanoid bots and brain-computer interfaces. But, she cautions, modern algorithmic entities have weak points, just as Talos did.

Buy Gods and Robots from Amazon.com. Science News is a participant in the Amazon Services LLC Associates Program. Please see our FAQ for more details.