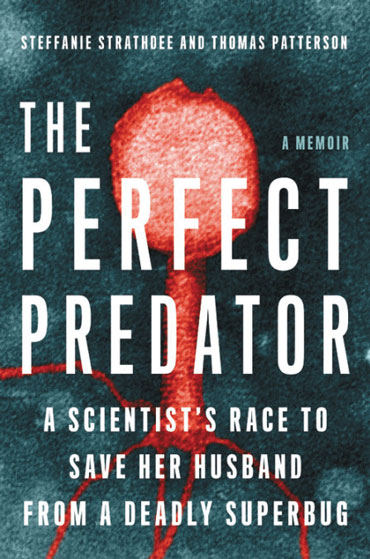 Epidemiologist Steffanie Strathdee and her husband, Thomas Patterson, went to Egypt in 2015 expecting to come home with some photos and souvenirs. Instead, Patterson was hit with his own version of the 10 plagues.

At first, doctors in Egypt thought Patterson had pancreatitis. But his health worsened after treatment, and he started hallucinating. Once flown to Germany, he was diagnosed with a multidrug-resistant bacterial infection in his pancreas. He was then airlifted to a hospital at Strathdee’s home institution, the University of California, San Diego. There, Patterson suffered several episodes of septic shock and spent months in a coma.

The Perfect Predator chronicles the couple’s encounter with a bacterium that was resistant to every available antibiotic, and the rush to find an alternative treatment to save Patterson’s life.

During the ordeal, Strathdee used her scientific training to research solutions and stumbled upon phage therapy. The idea is that even the most resistant bacteria can be defeated by their natural predators, viruses called bacteriophages. The nearly century-old treatment had been all but forgotten in the United States, in large part because of the invention of antibiotics, but was being used in parts of the former Soviet Union.

Doctors needed the right phage, one capable of parasitizing the bacteria infecting Patterson. So Strathdee asked a team of scientists to drop everything and check their phage collections while also hunting for environmental samples for a virus that could be turned into an experimental treatment. Within three weeks, two sets of researchers found phages that were a match. Patterson was treated successfully, and the first phage therapy center in the United States opened last year at UC San Diego.

Strathdee, who did most of the book’s writing, provides clear explanations of the science and weaves historical vignettes, such as the early days of research on penicillin, throughout her personal narrative.

The book is a real page-turner, though a few things may give readers pause. The first is the mention of Strathdee’s psychic, who appears a few times throughout the book and is later joined by a holistic healer. Then there are “interludes” written by Patterson. Over time, it becomes clear that these snippets are a peek into Patterson’s hallucinations, but the book would have been stronger if those passages had been clearly introduced, or left out altogether.

The interludes, and Strathdee’s reliance on some unconventional supports, are distracting, but they don’t take away from the book’s strong foundation in science and skillful storytelling.

Buy The Perfect Predator from Amazon.com. Science News is a participant in the Amazon Services LLC Associates Program. Please see our FAQ for more details.