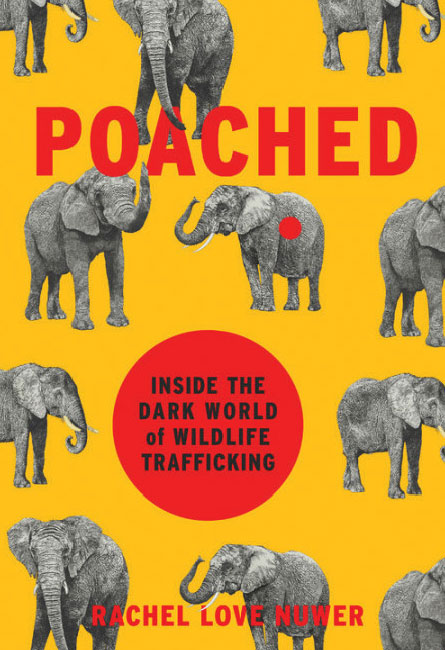 Perhaps the most unsettling scene in Poached, by science journalist Rachel Love Nuwer, comes early in the book, in a fancy restaurant in Ho Chi Minh City, Vietnam. The author and two friends sit down and are handed leather-bound menus offering roasted civet, fried tortoise, stewed pangolin and other delicacies made from rare or endangered species. The trio makes an abrupt exit, but only after seeing a live cobra gutted at one table and a still-living civet brought out to feed another group of diners.

Statistics on the illegal wildlife trade can be mind-numbing. Rhinos have dwindled to just 30,000 animals globally and tigers to fewer than 4,000. Over a million pangolins — scaly anteaters found in Africa and Asia — have been killed in the last 10 years. Just last month came a report from the Humane Society of the United States and the Humane Society International that the United States imported some 40,000 giraffe parts, from about 4,000 animals, between 2006 and 2015.

But in Poached, Nuwer gives readers a firsthand view of what the illegal wildlife trade is like on the ground and what, if anything, can be done to stop it. She accompanies a poacher into the U Minh forest of Vietnam in search of water monitors, cobras and civets. (Thankfully, they don’t find any.) She has dinner with a man who keeps a rhino horn in an Oreo tin. She visits a zoo in Japan that may have helped popularize trade in the rare earless monitor lizard. And she attends numerous meetings of wildlife officials and conservationists as they attempt to fight back against the illegal trade.

Poached isn’t all gloom and doom; there are a few success stories. Nuwer, for instance, visits Zakouma National Park in Chad where managers have halted the slaughter of elephants. This hard-won accomplishment exemplifies the book’s underlying message: There are no easy solutions to stopping wildlife trafficking. The effort in Zakouma required a lot of money and training for its rangers, which is not available in most places.

What’s most needed, Nuwer argues, is changing how we think about wildlife crime. Many people view poaching as belonging to a special category of illegal activity. But it’s not; it’s just crime. Those involved are often also dealing in drugs or conflict diamonds or human trafficking. A change in mind-set could help overcome a major conservation obstacle, Nuwer notes. Rather than detectives and the courts being tasked with handling this sort of crime, the job has been left to rangers, wildlife managers and conservationists. “As some have put it,” she writes, “it is like asking botanists to stop the cocaine trade.” The world’s wildlife deserves better than that.

Buy Poached from Amazon.com. Science News is a participant in the Amazon Services LLC Associates Program. Please see our FAQ for more details.