The four-volume, 2,726-page budget proposal that President Bush forwarded to Congress on Feb. 4 includes the largest-ever increase for scientific research and development, with particularly generous provisions for defense and health R&D programs. These priorities trump other areas of science, whose proposed allocations collectively break even, compared with the current budget. 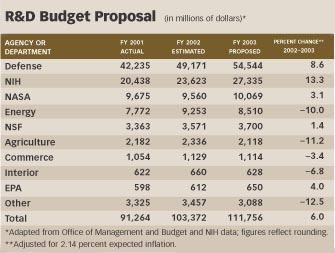 Of the $2.13 trillion in proposed federal expenditures detailed for fiscal year (FY) 2003, nearly $112 billion would go to R&D, an overall increase over FY 2002 of nearly $8.6 billion, or about 6 percent after accounting for expected inflation. The Department of Defense (DOD) and the National Institutes of Health (NIH) reap the lions share of the increase, a reflection of the new emphasis on national security, according to Bushs chief science advisor, John H. Marburger, who is director of the Office of Science and Technology Policy.

Under Bushs proposal, DOD would enjoy the largest R&D windfall, as calculated in dollars. It would get $5.4 billion dollars in new funding, or an inflation-adjusted 8.6 percent increase. The boost, part of a whopping 14 percent increase in the overall defense budget, would be dedicated to developing technologies related to, among other areas, cyberspace security and counterterrorism. Those endeavors would receive $1.8 billion and $900 million, respectively. Meanwhile, the administration is asking Congress to slightly trim DODs more basic research programs.

The proposed allotment for NIH reaches $27.3 billion, an increase of $3.7 billion over the institutes current budget for supporting biomedical research. That figure represents the final installment of a process initiated by former President Clinton and Congress to double the NIH budget over 5 years.

Programs to counter bioterrorism, including such threats as anthrax, smallpox, and plague, would get particular attention under Bushs budget, with approximately $1.5 billion in new funds. Thats six times the FY 2002 budget for antibioterrorism research.

However, the influx of money for that effort would divert expected resources from NIHs other areas of health research. Most institutes would experience after-inflation boosts between 6 and 7 percent, barely half the average lift that NIH programs have received during each of the past 4 years.

Cancer investigation fares better than most health research not focused on bioterrorism. The budget calls for an inflation-adjusted 10 percent increase for the National Cancer Institute. HIV and AIDS research at NIH would increase by $255 million, or about 8 percent after inflation.

Science programs unrelated to security or health are treated unevenly in Bushs budget. If endorsed by Congress, new initiatives spanning several agencies will strive to capitalize on areas of opportunity in information technology, nanotechnology, and climate-change research.

Rita R. Colwell, director of the National Science Foundation (NSF), calls the budget encouraging news for her agency, which would benefit from a modest funding increase in new-technology research and other research and education programs. NSF would also take over several R&D programs currently administered by other government agencies, in part because its the only government agency to receive high marks for fiscal management under the administrations new assessment system.

NASAs modest postinflation increase of 3.1 percent would cap next years budget for the costly and highly criticized International Space Station at $1.49 billion, a decline of $230 million from this years appropriation. A new $125 million initiative in the budget proposal would have NASA work toward nuclear propulsion and power systems for exploration of the outer solar system. Under this budget, the space agency would cancel planned missions to explore Pluto and Jupiters icy moon Europa, which may harbor a life-friendly ocean beneath its surface.

Of the five agencies with the largest R&D budgets, only the Department of Energy (DOE) is looking at a reduction in funding. The department conducts basic research and develops technologies in areas that include nuclear weapons and energy supply. The proposed overall R&D decrease of more than $700 million, or 10 percent after inflation, includes a $113 million–or 55 percent–cut in research related to the cleanup of contaminated nuclear-weapons sites. At the same time, $110 million in new funds would go toward R&D related to maintaining the nations nuclear-weapons stockpile.

Also, DOE would drop a 9-year-old joint venture that aims to develop more fuel-efficient cars and cost $127 million last year. In its place, the agency would launch a program to develop vehicles powered by hydrogen-consuming fuel cells. Called FreedomCAR, this program would receive $150 million in 2003.

This tack reflects the administrations desire to hand off projects with near-term commercial prospects to industry and reserve federal outlays for long-term, high-risk programs, says Marburger.

Several agencies with smaller R&D budgets are slated to absorb cuts. The Department of Agriculture would lose 9 percent of its R&D funding under the administrations proposal. Such cuts were anticipated as fiscal belt-tightening in response to economic recession and wartime priorities, according to USDA officials.

The Interior and Commerce departments would each surrender a program to NSF and give up some additional R&D funding under Bushs plan. Interior would lose $32 million, much of it from the U.S. Geological Surveys water-monitoring programs.

In contrast, the Environmental Protection Agency would receive a modest $38 million, or 4 percent postinflation, R&D increase. Much of the increase would go for assessing risks from pollutants.

Some of the Presidents proposed cuts are likely to meet resistance in Congress. Last year, the administration pushed for aggressive reductions outside the spheres of defense and health research (SN: 4/14/01, p. 231: Biomedicine, defense to sidestep budget ax). However, Congress ultimately voted to increase science appropriations by the largest amount ever (SN: 1/12/02, p. 20: Record science budget evaded proposed cuts).

The initial response from the Hill suggests that the new R&D budget could undergo a similarly critical review. House Science Committee Chairman Sherwood L. Boehlert (R–N.Y.) expresses mixed emotions about the proposal. Research spending is being treated better than other domestic discretionary programs, but apart from NIH, civilian R&D would remain anemic under this budget, he says.