A massive tax cut, a record defense budget, and a swipe at the congressional pork barrel are putting the squeeze on most categories of science and technology funding for next year. 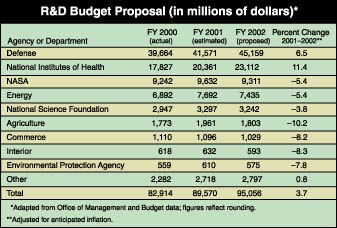 In President Bush’s fiscal year (FY) 2002 budget request, released April 9, overall research and development (R&D) funding would grow by 3.7 percent, to $95.1 billion in 2002. Nonetheless, the budgets of almost all top civilian R&D agencies would shrink. Only the National Institutes of Health would come out a winner.

The President’s proposal for NIH is $23.1 billion, up from $20.4 billion in 2001. After budget figures are adjusted for an expected inflation rate of 2.1 percent, that’s still an increase of 11.4 percent. In contrast, all other nonmilitary R&D agencies would take cuts of nearly 4 to 10 percent.

“Dismay, utter dismay” has descended on the scientific communities whose funding agencies face the knife, says Kei Koizumi, director of the R&D budget and policy program at the American Association for the Advancement of Science (AAAS) in Washington, D.C.

“This is not what I would call a pro-science or forward-looking budget,” laments Michael S. Lubell, spokesman for the American Physical Society in Washington, D.C.

The one-sided jump in biomedical funding flies in the face of a campaign in recent years by representatives of the physical sciences, in particular, to push for “a more balanced portfolio,” Koizumi notes. Health and Human Services Secretary Tommy G. Thompson, whose department oversees NIH, acknowledged that many science administrators consider the NIH boost out of balance. Still, he argues, “we feel that this money [would be] well-spent.”

Congress is already showing concern over the president’s R&D plan. “We’d prefer higher spending for R&D agencies other than the NIH,” comments David Goldston, chief of staff of the House Science Committee.

Along with NIH researchers, military scientists and engineers would enjoy a windfall. Their 6.5 percent funding hike to $45.2 billion would raise the military’s share of the federal R&D budget by more than 1 percent, to 47.5 percent. Under the Clinton administration, military research and development funds toppled from 58 percent of the R&D pie to just over 46 percent last year.

Defense planners have yet to decide how to spend the extra research bucks. “We’re a bit of an oddball in the budget world today,” confesses Pentagon spokesperson Susan Hansen. Until a review of military spending ends this spring, details will remain scarce, she says.

Spending by NASA on the International Space Station would hold steady at just over $2 billion. To fend off projected cost overruns, the budget proposal chops funding pegged for living and escape modules and for some research.

NASA is also eliminating a flyby of the planet Pluto and a sun-watching satellite called Solar Probe. Those cuts were a trade-off made to keep Mars missions well-funded and to cover overruns in a space-based infrared telescope and a mission to test general relativity, says NASA Administrator Daniel S. Goldin.

Only 1 year after a 17 percent R&D increase, the National Science Foundation (NSF) is OK with its proposed 3.8 percent cut, says NSF Director Rita R Colwell. “We found nothing negative to NSF [in the president’s proposal]. Quite the contrary, we feel that our strongest needs were met.”

Those needs include funding to improve science and math education and to relieve the fiscal plight of underfunded graduate students. NSF plans to launch a 5-year, $1 billion program to forge ties between universities and local schools.

As in the overall R&D budget, the distribution of money within the Energy Department tilts in favor of military-related programs. The department would devote $306 million, or $60 million more than last year, to studies related to stockpiled nuclear weapons. Funding for a huge nuclear-fusion laser called the National Ignition Facility would also grow by $37 million, to $245 million.

Meanwhile, preliminary numbers show nondefense R&D sinking by about $350 million. Nearly all the losses would come from broad cuts to the department’s energy-research programs. At the same time, the administration plans to kick off a 10-year, $2 billion research program to develop clean power from coal.

Hit hardest by the administration’s spending restraints would be those agencies with the smallest R&D budgets: Commerce, Interior, Agriculture and the Environmental Protection Agency.

Long a target of Republicans as a form of corporate welfare, the Advanced Technology Program of the Commerce Department’s National Institute of Standards and Technology would plummet from $145 million to scarcely $13 million–just enough to maintain existing programs until they close down. The program sponsors cutting-edge technology development in industry. Also taking a plunge would be the budget of the Interior Department’s U.S. Geological Survey (USGS). Much of the USGS’s proposed budget cut of $69 million would come from funding intended for water-quality studies and other research.

Steep reductions in research at the Agriculture Department and EPA would come largely from the administration’s vow to cease funding so-called earmarks–projects known pejoratively as pork-barrel spending–which members of Congress slip into the budget. This tough stand has also affected other R&D budgets, particularly at NASA and Energy.

Past experience, however, indicates that when a President eliminates earmarks in his initial budget, money for the deleted projects often creeps back into the final budget. Notes Lubell of the American Physical Society, members of Congress “control the purse strings, and they’re going to do what they want to do.”