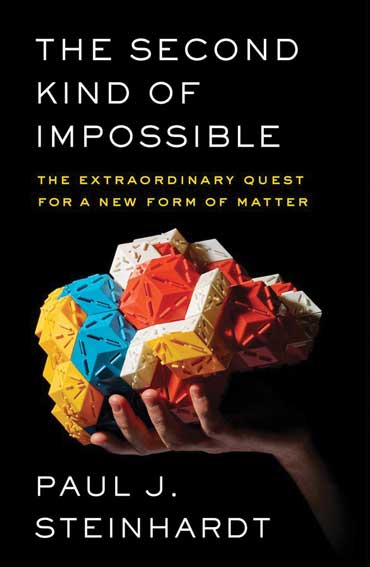 When Paul Steinhardt made a discovery that he had been working toward for more than 20 years, he did not cry “Eureka!” On that winter morning in the lab in 2009, he writes, he and a colleague “were dead silent, because no words were necessary.”

Steinhardt had just found a natural quasicrystal, a solid whose atoms flout the laws of crystallography by having order that does not repeat. The quasicrystal was in a rock that had been sequestered in a museum in Florence. In The Second Kind of Impossible, Steinhardt, a theoretical physicist, chronicles the detective work that led to his no-eureka-necessary moment — and sent him from Princeton University to the wilds of Siberia to find out how that rock had formed.

The very idea of quasicrystals was once derided. Chemist Linus Pauling joked, “There is no such thing as quasicrystals. Only quasi-scientists.” But in the 1980s, Steinhardt wondered if quasicrystals were truly out of the question, or if they were a “second kind of impossible” — something achievable under conditions that just hadn’t been considered yet. By 2009, scientists had synthesized these supposedly impossible materials. Steinhardt wondered if nature could make them too.

His memoir is part physics primer, part fantastic adventure and nearly all delightful. The book is divided into three parts: first, the mathematical work that showed quasicrystals are possible, then the search for a natural quasicrystal and finally the epic trek across the Russian tundra to find additional samples of the rock, a meteorite as it turned out (SN: 11/3/12, p. 24).

The account is chock-full of detail, sometimes to the story’s detriment. At one point Steinhardt complains of an e-mail written partly in “geochemist-speak.” He writes: “I felt like screaming out of sheer frustration.” Readers may at times feel similarly, especially in the first third of the book.

But the tempo picks up with the quasicrystal hunt. Starting with an e-mail from the geologist who identified that first special rock, the trail leads from Italy to the Netherlands to Russia (SN: 1/21/17, p. 16). Steinhardt’s quest touches on platinum panning in Siberia, secret diaries in Amsterdam, a mysterious Romanian mineral dealer and possible connections to the KGB.

Steinhardt’s affection and admiration for the journey’s colorful cast of characters infuse every page. Although his excitement is palpable, he is also careful and methodical, often reminding himself that he could be wrong. The Second Kind of Impossible shows the benefit of a slow and steady approach to science, where determination and luck are just as important as insight.

Buy The Second Kind of Impossible from Amazon.com. Science News is a participant in the Amazon Services LLC Associates Program. Please see our FAQ for more details.