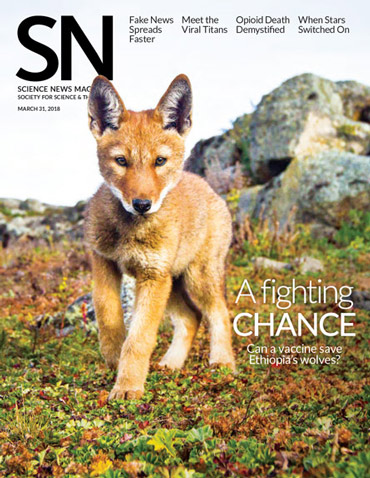 Polar cyclones, a surprisingly deep atmosphere and a spin reminiscent of solid masses are among the latest discoveries the Juno spacecraft has made as it orbits Jupiter, Christopher Crockett reported in “4 surprising things we just learned about Jupiter” (SN: 3/31/18, p. 10).

“Jupiter is one of those things [that] makes me sad that I’ll die never truly understanding the magnitude of what is going on there,” Reddit user Cornpwns wrote. “I would love to be in an invincibility bubble flying through Jupiter.”

Reddit user diggitydiggitydank wondered how gas planets such as Jupiter, which may not have a solid core (SN: 6/24/17, p. 14), could have formed in the early solar system.

But there are unanswered questions about the pebble accretion model, she says. “How did the pebbles glom together? Why didn’t they just bounce off of each other? And if Jupiter doesn’t have a core now, where did the core go?”Jupiter’s birth is still debated, but scientists have a few basic ideas, Science News astronomy writer Lisa Grossman says. One theory is that relatively small rocks may have collided about 4.5 billion years ago to form a larger rocky core — a process called pebble accretion. That core would have had enough gravity to start gathering lots of gas fairly quickly. “Poof! You have a Jupiter,” Grossman says.

When the team looked at the critter under a microscope, the scientists also saw the tardigrade excrete a green poop about the size of the animal’s body (shown below). The event, rarely caught on film, had YouTube viewer Kimani Powell musing about tardigrade diets: “What do they eat again? Green eggs and ham?”

Another theory is that Jupiter could have formed directly from gas in the protoplanetary disk of gas and dust that surrounded the infant sun. Regions of the disk could have become so massive that gas collapsed to form giant planets. If true, “that would explain why Jupiter wouldn’t have a core,” Grossman says.

Facebook user Har Mahdeem thought that viruses should be recognized as a new kingdom on the tree of life.

For decades, the debate over whether viruses are alive has ebbed and flowed (SN: 4/2/38, p. 221). Many biologists have dismissed viruses as nonliving, in part, because viruses can’t reproduce on their own and typically lack much of the genetic complexity of life-forms. Recent discoveries of giant viruses and their genetic hoards continue to fuel these debates (SN Online: 2/27/18).

Viruses are not currently included on the tree of life. But the tree is undergoing a tumultuous revision — kingdoms that used to crown the top have become branchlets within much larger supergroups (SN: 8/8/15, p. 22). Putting viruses in a plausible place on this emerging tree would require tracing ancient branches to work out any viral connections to unambiguous life. It would be a huge challenge, says Science News life sciences writer Susan Milius.