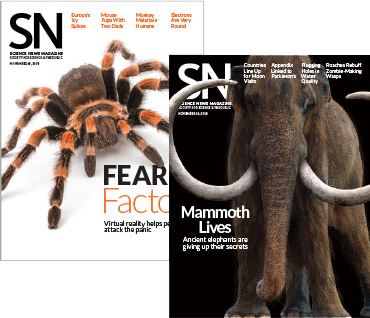 Rising temperatures and more frequent droughts could cut barley crop yields worldwide by the end of the century, leading to beer shortages and high prices, Jennifer Leman reported in “Add beer to the list of foods threatened by climate change” (SN: 11/10/18, p. 5).

Online reader Jean Beaulieu was hopeful that scientists will figure out an easy way to grow barley in a warmer world. “With current crop science, crops will easily be able to follow the warmth northward. It’ll be a piece of cake, or better yet, a cool beer,” Beaulieu wrote.

The researchers acknowledge that changes in barley agriculture — increased farm productivity due to new technology, more drought- or heat-tolerant crops, or increases in barley stockpiling — might help offset damages, Leman says. But the scientists note that extreme heat and drought events would still contribute to serious supply disruptions.

Electrons are almost perfectly round thanks to the distribution of their positive and negative charges, Lisa Grossman reported in “What the electron’s near-perfect roundness means for new physics” (SN: 11/10/18, p. 7).

That electrons have both positive and negative charges puzzled reader Bruce Mason. “Is the electron a composite particle? Where do the positive parts come from?” he asked.

Borrowing a familiar phrase from astronaut Neil Armstrong, online reader Dan praised the achievement: “That’s one small step for a man, one giant leap for mankind.”

The electron is negatively charged, but the elementary particle never exists by itself, says Yale University physicist David DeMille. Electrons are always surrounded by clouds of “virtual” particles that constantly wink in and out of existence. Such clouds contain particles with positive and negative charges.

Researchers look at the electron and its cloud as one composite object. “My favorite analogy is the Pig Pen character from Charlie Brown — if you see him from far away, you can’t see the cloud of flies and dust around him, but you might notice that his shape is different than that of a typical person,” DeMille says.

The camera measures light intensity in decibels. “Since decibels are units of measure of sound intensity, how can they be equated with light?” reader Herb Linn asked.

Many of us learned in school that decibels are used to express sound intensity, Leman agrees, but the unit is commonly used for a wide variety of measurements in science and engineering. Decibels describe ratios of physical properties on a logarithmic scale.

Players can form an electron from two interacting photons, or particles of light. Reader Mike Speciner noted that this process wouldn’t produce just an electron. The photons would create an electron paired with its antimatter partner, a positron.

Physics writer Emily Conover shares Speciner’s complaint. While a supplementary game booklet explains that a positron would also be produced, players who don’t read the booklet would miss that information.