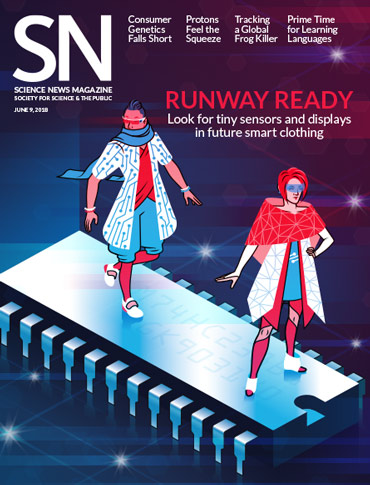 The pressure inside a proton is the highest of any known substance, Emily Conover reported in “The inside of a proton endures more pressure than anything else we’ve seen” (SN: 6/9/18, p. 10).

“I don’t think it’s valid to think of pressure on a quantum level the same way we do classically,” Reddit user phazer6 wrote. Pressure relates to collections of particles, but “here we’re dealing with a single particle.… How can we possibly speak of pressure the same way in such different contexts?” phazer6 asked.

Although the proton can be thought of as a single particle, it is made up of other particles called quarks and gluons that interact with one another. The way we normally think of pressure in a gas is based on molecules’ motions and how molecules bounce off walls of the container that confines them. “In an ideal gas, the molecules do not interact with each other,” says theoretical particle physicist Peter Schweitzer of the University of Connecticut in Storrs. Pressure can also be defined for liquids and solids, in which internal forces allow molecules to interact. The difference for a proton is that the interaction is extremely strong, so that it is impossible for a lone quark to escape. There’s no direct way to measure a proton’s internal pressure, “but one can infer information about the pressure… from high energy experiments,” Schweitzer says.

Online reader Mizuki Mochizuki wondered about the harm that electronics in clothing may pose to wearers.

Most clothing-embedded electronics would run on very low current — like today’s wearable devices — and couldn’t give users an electric shock, says wearable technology researcher Lucy Dunne of the University of Minnesota campus in St. Paul. The battery used to power the electronics is another question. If a high-capacity battery were used, it would have the same risks as a mobile phone, she says. The battery could overheat and catch fire if shorted or crushed. “Durability would have to be a manufacturer concern, just as it is with mobile phones,” Dunne says.

That’s a common assumption, but insect species, like the plants and vertebrates in the study, each have their preferred climatic niches: not too hot or cold, not too wet or dry, Gramling says. “The researchers looked broadly at how the distribution of preferred niches is projected to change as the planet warms,” she says. “But they did not consider how well specific species might be able to adapt to a changing climate, which is a focus of very active research.”