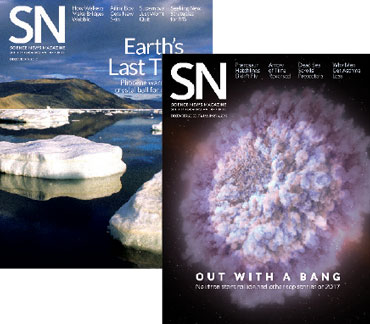 Supernova iPTF14hls has erupted continually since its discovery in 2014, fluctuating in brightness at least five times. It may have had two other outbursts in the past, Lisa Grossman reported in “This star cheated death, exploding again and again” (SN: 12/9/17, p. 8).

Reddit user Bobgushmore wondered if the exploding star might actually be a supernova impostor similar to one of the biggest and brightest star systems in our galaxy, Eta Carinae, which is extremely volatile, but not a supernova.

Evidence suggests that iPTF14hls really is a supernova, says Iair Arcavi, an astrophysicist at the University of California, Santa Barbara. The supernova probably was “a very, very massive star that underwent eruptions” similar to those observed for Eta Carinae, Arcavi says. But iPTF14hls is much more energetic — about 50 to 100 times brighter than Eta Carinae’s largest-known eruption. The oddball supernova’s ejected material is also flying about 10 times faster, he says. Arcavi thinks that Eta Carinae, which isn’t yet in its death throes, could someday turn into a supernova like iPTF14hls.

Scientists trained sheep to recognize pictures of celebrity faces including those of Barack Obama, Emma Watson and Jake Gyllenhaal (experiment shown below). Results suggest that the animals have advanced face-processing abilities similar to those of humans, Mariah Quintanilla reported in “Face it: Sheep are just like us when it comes to recognizing people” (SN: 12/9/17, p. 14). One reader on Facebook joked about the celebrity-spotting flock.

So basically their performance is on a par with AI systems. I wonder which uses the most RAM.
Kevin Pretorius

The detection of gravitational waves emanating from two colliding neutron stars has implications for the mysterious dark energy that makes up about 70 percent of the universe, Emily Conover reported in “This year’s neutron star collision unlocks cosmic mysteries” (SN: 12/23/17 & 1/6/18, p. 19).

Charlie Baker was confused about the amounts of dark energy and dark matter that make up the cosmos. He pointed to another story, “Excess antielectrons aren’t from nearby dead stars, study says” (SN: 12/23/17 & 1/6/18, p. 12), in which Conover wrote that most of the universe’s mass is made up of dark matter. “This civilian would really appreciate some further education,” Baker wrote.

In total, the universe is roughly 70 percent dark energy, 25 percent dark matter and 5 percent matter, according to combined data from the Planck satellite, the Dark Energy Survey and other observations, Conover says.

In her editor’s note “Would you opt to see the future or decipher the past?” (SN: 12/9/17, p. 2), Acting Editor in Chief Elizabeth Quill asked readers what scientific answers they might seek if they had a crystal ball.

Roger Bennett opted to look ahead. “I would be most interested in seeing into the future to determine what effects global warming, weather change, overpopulation and scarcity of clean drinking water [have] in store for humanity,” Bennett wrote.

But most readers who wrote to Science News in response to the editor’s note preferred to look back in time. Christopher Pegues thought that peering into the future might change it. “I’m not sure about multiple timelines [or] universes — that’s a whole different story — however, I feel fairly certain that there are too many uncertainties lying ahead to make a peek worthwhile. Looking back at least may answer some unknowns, if one chooses wisely.”