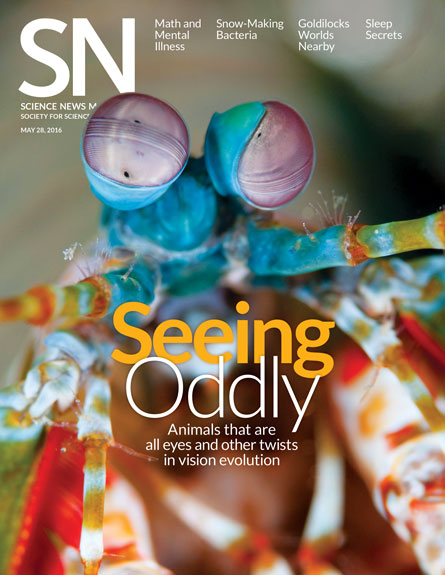 The visual systems of sea urchins, mantis shrimp and other creatures are broadening scientists’ understanding of what qualifies as an eye, Susan Milius reported in “Strange visions” (SN: 5/28/16, p. 22).

“The article … may be the best written and most fascinating article I have read in Science News, covering several decades,” wrote Patrick Roache. Reader RME76048 added: “Pardon the pun, but it was quite eye-opening.”

Interest in animal vision goes beyond biology, reader Paul Gorenstein of the Harvard-Smithsonian Center for Astrophysicsnoted. Astronomers have developed X-ray telescopes inspired by crustacean eyes, which have a wide field of vision. “These telescopes can have nearly an all-sky field of view, which is ideal for detecting and positioning fast transient sources, which include gamma-ray and X-ray bursts plus X-rays that are expected to accompany gravity waves,” he wrote.

Pseudomonas syringae, a microbe found in plants that is known for making artificial snow, uses a protein to rearrange water molecules so the liquid freezes at temperatures above those at which ice crystals normally form, Sarah Schwartz reported in “Bacteria use cool trick to make ice” (SN: 5/28/16, p. 5).

“How does it benefit this bacterial species to rearrange nearby water molecules?” asked online reader Maia. “Does it make plants easier to infect?”

Scientists are intrigued by hints of a possible new subatomic particle that appeared in proton collisions at the Large Hadron Collider outside Geneva, writer Emily Conover reported in “Hints of new particle baffle physicists” (SN: 5/28/16, p. 11). Assuming the particle actually exists, one online reader suggested that researchers name it after one of the LHC’s notorious foes — a weasel that briefly brought the collider to a standstill in April (SN Online: 4/29/16).

Let’s call it the Weaseltron.

It appears so, Schwartz says. Raising the temperature at which ice crystals grow makes frost form more readily on and in plants. Once ice damages tissues, it’s easier for bacteria to invade. “There have been some conflicting data on the particular role and extent of the bacterium’s ice-making on plants, and not all strains of the bacterium infect plants,” she says. “But P. syringae, which is especially damaging to woody plants including fruit trees, can be a costly threat for farmers and gardeners — despite its usefulness on the slopes.”

Researchers mapped words and their meanings to specific regions of the brain. The findings indicate that humans comprehend language in a way that’s more complex than previously thought, Meghan Rosen reported in “Words’ meanings mapped in brain” (SN: 5/28/16, p. 15).

Animals don’t have the same language capacity that people do, says neuroscientist Jack Gallant of the University of California, Berkeley. “But to the extent that their calls have specific meanings, one could indeed map how that meaning is represented in an animal’s brain.” For example, vervet monkeys have separate alarm calls for different predators. By playing those alarm calls to a monkey in a brain scanner, scientists could map the representations of these concepts in the brain. “Of course,” he says, “it might be difficult to convince a vervet monkey to lie still in the MRI machine.”

Online reader Robin wondered about the evolutionary origins of this ability.

Sleeping with just half a brain offers a compromise between safety and sleep, Sanders says. Unihemispheric sleep allows aquatic mammals to surface to breathe and birds to detect predators, all while letting part of the brain rest. Scientists don’t understand all of the evolutionary trade-offs. The relative rarity of unihemispheric sleep among mammals suggests that the partial shutdown comes with some unknown costs.

In “Jupiter’s turbulent weather runs deep” (SN: 7/9/16, p. 14), Jupiter’s Great Red Spot is described as “a storm more than twice as wide as Earth.” While the storm used to be that large, it has been shrinking and is now just a bit wider than Earth.