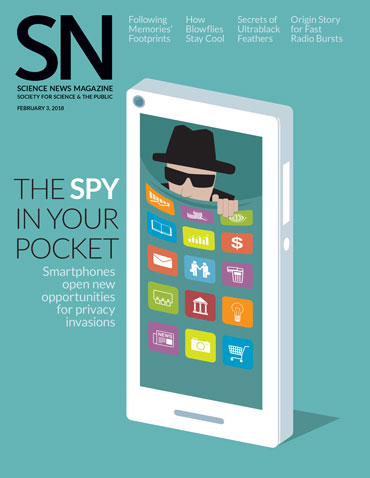 Inspired by flatworm memory experiments from the 1950s, researchers are on the hunt for the elusive engram — the physical mark that a memory leaves on the brain — Laura Sanders reported in “Somewhere in the brain is a storage device for memories” (SN: 2/3/18, p. 22).

Readers flooded Science News with their thoughts and questions on the topic.

Elizabeth Elliott wondered if Alzheimer’s disease might affect how memories are stored deep in the brain.

MIT neuroscientist Susumu Tonegawa has pulled up silent engrams — memories that aren’t readily accessible — from the brains of mice with signs of Alzheimer’s disease, Sanders says. “It’s quite possible that Alzheimer’s-related memory impairments could turn out to be problems of retrieval, not storage.”

Dead stars known as pulsars (one illustrated above) emit beams of radiation that sweep past Earth at regular intervals. Those signals could allow a spacecraft to determine its location in space, like a stellar version of GPS, Emily Conover reported in “Spaceships could use blinking dead stars to chart the way” (SN: 2/3/18, p. 7). Twitter user @Scott98390 suggested a name for the potential pulsar-based navigation system — GPS: Galactic Positioning Stars.

Flatworm experiments that showed worms could retain a memory after losing and regrowing their heads reminded reader Will Juncosa of a similar science fair experiment that he and his brother attempted. “Imagine two dozen dying platyhelminthes … subjected to two dumb teenagers with a razor blade,” Juncosa wrote. “The question of memory and the ‘location’ of consciousness has intrigued me for over a half-century since then.”

The existence of hypothetical particles called magnetic monopoles would explain why electric charge comes in integer multiples of the charge of an electron instead of a continuous range of values, Emily Conover reported in “Magnets with a single pole are still giving physicists the slip” (SN: 2/3/18, p. 10).

Conover agrees that the concept is confusing. “While you’re correct that quarks have charges a fraction of the electron’s charge, the unusual thing about quarks is that they never appear alone,” she says. Quarks are always paired up with other quarks, such that their total charge is an integer multiple of the electron’s charge. “So we can never observe a single particle with a fractional charge,” Conover says. “As a result, scientists still consider the electron’s charge to be the fundamental unit of electric charge.”

Researchers proposed that blowflies might cool themselves by hanging a liquid droplet from their mouths and then, once the droplet has cooled some, take it in again, Susan Milius reported in “Blowflies use drool to keep their cool” (SN: 2/3/18, p. 12).

Reader and insect physiologist John Stoffolano objects to the researchers calling the process “drooling” and doubts that blowflies need cooling.

This process is called “bubbling,” says Stoffolano, of the University of Massachusetts Amherst who has published on the process. The blowflies are dangling droplets of liquid food that have been stored in a special organ called a crop, Stoffolano says. Water evaporates from exposed droplets, reducing a meal’s weight and concentrating nutrients, important considerations for a flying insect, he says.

The researchers who proposed the cooling idea are working bubbling into their thinking. “The fact that the behavior might be primarily dedicated to something else makes the story even more interesting,” says Denis Andrade of the Universidade Estadual Paulista in Brazil.