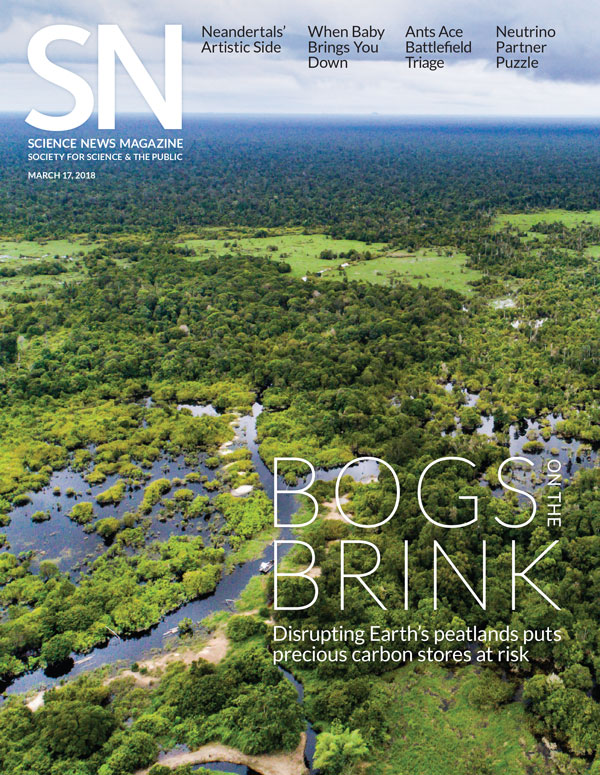 Physicists are ramping up their search for neutrinoless double beta decay, which could help explain why there is more matter in the universe than antimatter, Emily Conover reported in “The quest to identify the nature of the neutrino’s alter ego is heating up” (SN: 3/17/18, p. 14).

Reader F L Stiles wondered how this decay could explain a surplus of matter. “It seems to me that the neutrinoless double beta decay … presumes an excess of matter to begin with,” he wrote.

Neutrinoless double beta decay doesn’t explain the matter-antimatter asymmetry on its own, Conover says. “Instead, the process indicates that neutrinos are their own antiparticles, which would open the door for the existence of another process that could create such an asymmetry,” she says. “Early in the universe, there might have been superheavy neutrinos that decayed mostly to matter particles. Because this heavy neutrino would be its own antiparticle, it wouldn’t have had a partner that would balance things out by decaying to antimatter.”

Archaeologists found evidence that rabbits were not domesticated because of a papal decree, Tina Hesman Saey reported in “Study debunks fishy tale of how rabbits were first tamed” (SN: 3/17/18, p. 5). The decree supposedly classified the furry mammals as fish so rabbit meat could be eaten during Lent.

Ron Pauluh joked that he can sleep well now that he knows rabbits aren’t fish. “The only other thing that keeps me up is that rabbits lay colored chicken eggs once a year. That should be checked into with as much gusto,” he wrote.

“Thank you for giving me a chuckle,” Saey says. Some of the researchers who debunked this rabbit tale are indeed investigating the origins of Easter traditions, she says. By combining history and science, the team hopes to determine when modern traditions first emerged in Britain; how animals such as brown hares, rabbits and chickens became associated with the holiday; and why certain customs — including hunting for eggs hidden by the Easter Bunny — arose.