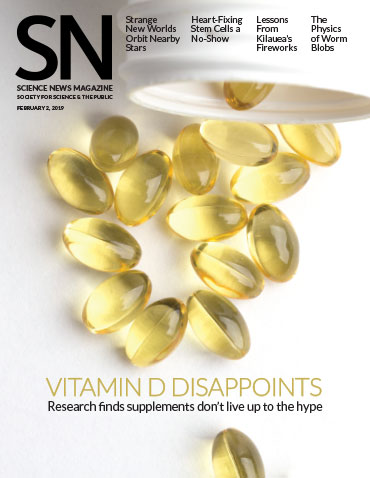 Which way is up?

Initial observations of the Kuiper Belt object MU69, nicknamed Ultima Thule, suggested it had a snowmanlike shape. Ultima Thule’s two lobes are connected by a narrow neck that appears brighter than the rest of the space rock’s surface, Lisa Grossman reported in “New Horizons shows Ultima Thule looks like a snowman, or maybe BB-8” (SN: 2/2/19, p. 7).

“The photo of Ultima Thule was fascinating,” reader Thomas Ostwald wrote. “However, the explanation of the bright ‘neck’ as grains that rolled ‘downhill’ was a shock! Which way is up?”

Scientists consider the “up” direction opposite the pull of gravity on Ultima Thule. It helps to imagine you’re standing on the space rock, says James Tuttle Keane, a planetary scientist at the California Institute of Technology.

Planetary scientist James Tuttle Keane drew a handy diagram of MU69 (not to scale) to help explain how gravitational forces influence the direction of “up.” He says it helps to imagine that you’re walking (or sledding) on the rock’s surface.

As you move closer and closer to the neck connecting the lobes, the gravitational pull from Thule would start to have a bigger influence than before. This would change the “up” direction. It would no longer be perpendicular to the surface.

When “up” isn’t perpendicular, there’s a slope. And so loose material on the surface of MU69 might “slump into” the neck region, Keane says. But that is just one of the many ideas scientists have for explaining Ultima Thule’s bright neck.

Additional observations indicate that the space rock is actually shaped more like two lumpy pancakes stuck together, rather than two snowballs. That might change scientists’ understanding of Ultima Thule’s gravitational field “a little bit,” Keane says. He and colleagues are working on a study to figure out what those changes could be.

Generally, larger plants require more water than smaller plants, says Paul South, a molecular biologist with the U.S. Department of Agriculture in Urbana, Ill. These engineered plants “use the same amount of water per a given area or size, but since they are bigger they would use more water” than nonengineered plants, he says.

Astronomers spotted a mysterious flare-up 200 million light-years from Earth. Dubbed the “Cow,” the flash may have resulted from a star exploding in a new type of supernova, Lisa Grossman reported in “A cosmic flare called the ‘Cow’ may reveal a new way that stars die” (SN: 2/2/19, p. 13). Sticking with the bovine theme, Reddit user deadHD suggested calling the event that created the Cow a “moopernova.”

Reader Sandra Mack thought that sunlight may deliver the health benefits that researchers were expecting from vitamin D supplements.

Both sunlight and supplements can make up for deficiencies, Beil says. But supplements are used in studies because they safely deliver vitamin D at higher levels. “Researchers still haven’t determined whether sunlight can safely deliver high amounts of vitamin D,” she says.