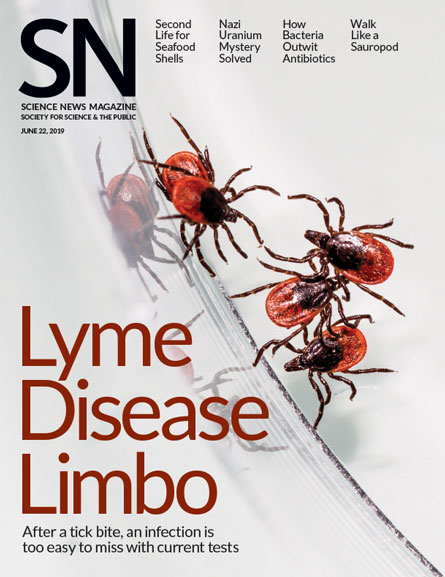 Lyme disease is hard to detect, but scientists are investigating new diagnostic approaches that could help people get treated for the tickborne illness sooner, Laura Beil reported in “New approaches may help solve the Lyme disease diagnosis dilemma” (SN: 6/22/19, p. 22).

“I found the info in a recent issue about better ways to detect Lyme disease to be very interesting,” reader Hazel Beeler wrote. “But a gram of prevention is worth a kilogram of detection and treatment.” Beeler noted that there is a Lyme vaccine for dogs, and wondered about a vaccine for people.

A Lyme vaccine for people was available in the United States from 1998 until 2002. The vaccine was effective, but its maker voluntarily removed it from shelves partly over public concerns that the vaccine triggered arthritis. At least 1.4 million doses of the vaccine were doled out before it was taken off the market, according to a review published in Clinical Infectious Diseases in 2011. About 100 vaccinated people reported developing arthritis, researchers found.

Now, no human Lyme vaccines are available in the United States, but at least one is in development, Beil says. Called VLA15, the vaccine candidate is in Phase II clinical testing, which assesses a drug’s efficacy. Researchers expect to publish results in 2020.

A mysterious uranium cube that came into a physicist’s possession in 2013 was once part of an attempt to build a nuclear reactor in Nazi Germany, Emily Conover reported in “How scientists traced a uranium cube to Nazi Germany’s nuclear reactor program” (SN: 6/22/19, p. 16). Readers online noticed the item’s resemblance to iconic cubes in popular culture. “That’s a Tesseract,” CatO9Ales joked, referring to a device featured in Marvel comics and related movies, such as The Avengers and Thor. “If you know what’s good for you, you’ll move it to Asgard right away,” CatO9Ales wrote. Online reader stargene thought it looked like a spaceship belonging to the Borg, an alien hive mind in the television show Star Trek: The Next Generation.

The U.S. Centers for Disease Control and Prevention estimates that it takes 36 to 48 hours for bacteria that cause Lyme disease to make their way from a tick into a person’s body, Beil reported in the story. Reader Tania Hanson-De Young doubted that timeline and thought it was possible for a tick to transmit the bacteria within a day.

It’s very unlikely that Lyme-causing bacteria could infect a person in less than 36 hours, says Charles Chiu, an infectious disease physician and microbiologist at the University of California, San Francisco. Data from multiple studies in rodents support the CDC timeline, he says. And a study in humans, published in 2001 in the New England Journal of Medicine, “provides empirical evidence that transmission at less than 24 hours is extremely rare,” Chiu says.

Of course, there are factors that may affect transmission time in people, he says. Some of those factors include the maturity of the tick and the number of feeding ticks on a person.

Reddit user idriveataco wondered why Neandertals aren’t considered part of the human species. “We were able to breed with them and have viable offspring. Isn’t that a determinant of speciation?” idriveataco asked.

The traditional definition of “species” as a group of organisms that can breed only among its own kind doesn’t always hold up (SN: 11/11/17, p. 22). Many closely related animal species as well as plant species interbreed, Bower says.

“Anthropologists have argued for decades about whether Neandertals were a separate species called Homo neanderthalensis, or were a big-boned, slope-jawed version of Homo sapiens,” he says. Some scientists have used ancient DNA studies to argue for Neandertals as a separate species, which is the most popular view. “It’s still not clear, though, how many DNA differences are enough to establish without doubt that … Neandertals belonged to a species apart from Homo sapiens,” Bower says. “Stay tuned.”