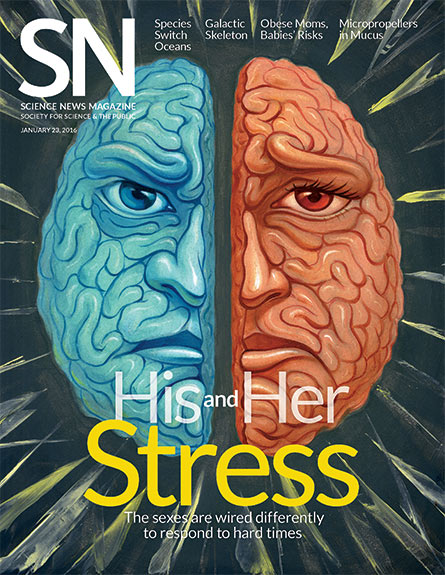 Men and women react differently under pressure, Susan Gaidos reported in “He stress, she stress” (SN: 1/23/16, p. 18). Scientists are studying the genetic and cellular underpinnings of stress responses to try to understand why some stress-related disorders, including depression, anxiety and post-traumatic stress disorder, are more common in women than men.

Several online readers drew attention to a chart accompanying the story that showed higher prevalence of alcohol and drug abuse in men compared with women. Stress-related disorders that disproportionately affect men also need explaining, they agreed. “We respond differently (on average) to stress,” wrote Owen Okie, “but responses can be hidden behind coping mechanisms — addiction or gambling, or violence, or so on.”

The prevalence of alcohol and drug abuse in men is yet another example of how the sexes respond differently to stress, Gaidos says. This particular disparity could be a story in itself. “In 2008, Yale University researchers found that men are more likely to abuse alcohol than women under stressful conditions, and that women are more likely than men to respond with depression or anxiety,” she says. “Researchers continue to explore how the higher rate of alcohol abuse and drug abuse is related to stress in men.”

The tattoos on the wrist, legs, back and ribs of Ötzi the Iceman predate the body art on a mummified man from South America, Bruce Bower reported in “Iceman has the world’s oldest tattoos” (SN: 1/23/16, p. 5).

“The really cool part is, they may have been done to help with a medical condition,” wrote Twitter user @firejohn78. It’s possible, says Bower.Scientists who study Ötzi, discovered in the Italian Alps in 1991, say that most of his tattoos are located on or next to parts of his body that probably caused him pain. Though the therapeutic importance of the tattoos is unknown, many appear at points considered to be crucial in acupuncture treatment today. That connection is intriguing because acupuncture was thought to have originated in Asia — a couple thousand years after Ötzi’s death.

Origins: The Scientific Story of Creation takes a chronological approach, according to our recent review of the book (SN: 1/23/16, p. 27). “The universe’s ‘let there be light’ moment arrived an estimated 380,000 years after the Big Bang,” wrote Sid Perkins. “That’s when the light-blocking fog of charged subatomic particles generated in the universe’s first few moments finally cooled enough for neutral hydrogen and helium atoms to form, thus rendering the universe transparent to photons long trapped in limbo.”

Rob Walty wondered how this description fit with other explanations he has heard that make it sound like the universe went dark in these moments. “Can you clarify these apparent contradictions?” Walty asked.

Though they might appear so, the two explanations are not contradictory, says managing editor Tom Siegfried. Instead, they take two different points of view on the universe. Until 380,000 years after the Big Bang, the universe was akin to a big ball of radiant plasma. Imagine, for example, that the whole universe resembled the sun. It would have been incredibly bright, so bright in fact that anybody within the universe wouldn’t be able to see anybody else because light emitted from one object would instantly be engulfed in the firestorm. At 380,000 years after the Big Bang, though, the temperature cooled enough for the plasma to form ordinary atoms. In one sense, the universe, the firestorm, went dark. But now light could freely travel, making anybody visible to anybody else.