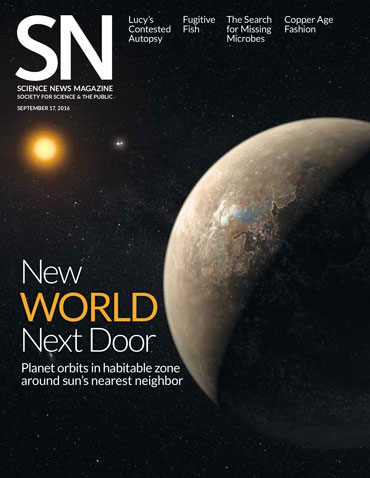 Some readers thought there was too much excitement over the new potentially habitable planet.

Christina Gullion believes keeping Earth habitable in the face of a changing climate is more important than searching for other planets. “Off-planet exploration seems to me to be a counterproductive diversion of funds and scientific knowledge,” she wrote. “I think it is self-indulgently romantic to invest scarce resources in curiosity about life out there in the universe when we could be protecting and enhancing life here on Earth.” Although Proxima b is relatively close to Earth, Gullion correctly noted that it is still too far away to reach anytime soon.

Even if humans could travel to Proxima b, reader Steve Moore pointed out, scientists don’t know much about the planet. It could be tidally locked with its star and vulnerable to solar flares, he said, which would make it hard, if not impossible, for humans to live on.

Crockett agrees that enthusiasm for Proxima b should be tempered by the little we know about the planet — so far, only its minimum mass, orbit and a few details about its star. Tidal locking is possible, Crockett says, “though there’s an active debate about whether that would be OK for habitability or not.” And though solar flares also pose a threat to habitability, “a denser atmosphere might be able to withstand Proxima’s flares,” he says. “We just won’t know until we get better data on the planet.”

Science News’ Wild Things blog covers the weird and wonderful in the natural world. “Nature has a dog problem” (SN Online: 9/30/16) recently got readers buzzing online and on Facebook. Feral cats may wreak havoc on wildlife, but so do roaming dogs, Sarah Zielinski reports. Researchers have yet to fully assess dogs’ environmental impact. Join the discussion at bit.ly/SN_wilddogs

Despite all of the unknowns, Crockett still thinks it’s an exciting discovery. “The proximity of the planet means it’s probably going to come under a lot of scrutiny in the years and decades to come,” he says. “And knowing that there’s a planet right next door is pretty neat. I can’t wait to see what we learn about it.”

Researchers worry that escapes of farmed salmon, cobia and other fish into the ocean could weaken or harm native wildlife, Roberta Kwok reported in “Runaway fish” (SN: 9/17/16, p. 22).

“I wondered if anyone had considered training farm-raised fish to associate a sound or some other stimulus with food,” Rick Gelbmann asked. “Then when fish escape, the sound could be used to attract the fish, making it easier to recapture them.”

Scientists have successfully trained species such as Atlantic salmon to swim to a food source in response to a tone. But for runaways, this strategy “is basically impractical,” says Tim Dempster, a sustainable aqua­culture researcher. Fish often escape d­uring storms when it’s tough to deploy equipment. Escapees tend to flee quickly, so the sounds might not reach them. And farmers would have to train a huge number of fish just to potentially recapture a small fraction.

Bioacoustician Frédéric Bertucci notes that adding another source of human-made noise to the ocean could also affect nearby wild animals.

Despite a new analysis of data from the Kepler Space Telescope, the slow-dimming and sporadic flickering of Tabby’s star remains a mystery, Christopher C­rockett reported in “Fading star still baffles a­stronomers” (SN: 9/17/16, p. 12).

Walt Davis wondered if the dimming could be caused by the star orbiting a black hole. “As the star moves closer to alignment behind [the black hole] … the star’s light rays are being more and more bent away from us,” he wrote.

“As weird as this star is, a black hole is probably not the culprit,” Crockett says. Astronomers would be able to detect the star’s orbital motion if it were orbiting a black hole, but the star appears to stay put. “And if gravity of a companion black hole was occasionally bending the starlight directed toward Earth, it would make the star appear brighter, not darker,” he says.