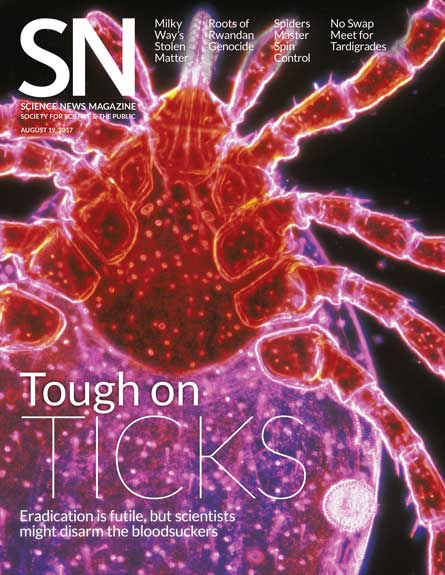 Astronomers estimate that wandering Jupiter-mass planets without a parent star are about a tenth as common as once believed, Ashley Yeager reported in “Giant solo planets are in limited supply” (SN: 8/19/17, p. 10).

Online reader Brian Bixby wondered how often such a rogue planet would come close to our solar system and proposed that one near the Kuiper Belt or Oort cloud could send swarms of comets headed toward Earth.

“Based on rough estimates, there could be a rogue planet closer to the solar system than the closest star system, Alpha Centauri, which is 4.3 light-years away,” Yeager says. But that’s still a lot of space for a rogue planet to roam, so it is unlikely that it would come very close to our solar system. “Even if a rogue did come relatively close, it may not pose that much of a threat,” she says. “Comets in the Oort cloud are probably widely spaced too, so it is unlikely that the comets would encounter a rogue or come near enough for it to send even one comet hurtling toward Earth.”

New dating of ancient artifacts from Australia, including the oldest known polished ax heads, suggests that humans may have first set foot in the region 65,000 years ago, Maria Temming reported in “Humans’ arrival in Australia redated” (SN: 8/19/17, p. 10).

Across the United States, people flocked outside to view the total solar eclipse on August 21. Science News asked readers to send us their eclipse photos, and we weren’t disappointed. The photo below, taken by J.P. Lawrence in Makanda, Ill., shows the diamond ring effect. This effect is caused by the moon’s rugged surface letting light shine through as the moon almost completely blocks the sun. See more reader photos on Twitter.

If the first Australians arrived by sea, they would have needed tools more advanced than primitive axes to get there, Stephen Wimbourne wrote online.

The first human colonists may have come by sea, says archaeologist Peter Hiscock. If they did, they probably came in bamboo boats, which wouldn’t have required axes or more advanced tools to make. In fact, axes at that time were hardly primitive. “In other parts of the world, [axes] were not invented until much later,” Hiscock says. A­ustralia is home to a number of hardwood tree species, so the ax would’ve been a crucial, cutting-edge invention.

Data from the Kepler space telescope hint at the existence of an exomoon — a moon orbiting a planet orbiting a distant star, Lisa Grossman reported in “Possible exomoon spotted” (SN: 8/19/17, p. 15).

Online reader Robert Stenton wondered if the exomoon might instead be part of a double-planet system.

Researchers have yet to make additional observations of the object. At this point, it could be a moon or part of a planetary tango, Grossman says.

A double-planet system has yet to be discovered, although Pluto and Charon may be an example of a double system of dwarf planets. In a double-planet system, two planets orbit each other and a common center of gravity located outside of both planets. If the center of gravity is within one of the celestial bodies, though, then the other body would be considered a moon.

In the fascinating facts about tick b­iology presented in the Editor’s Note in the August 19 issue (SN: 8/19/17, p. 2), the amount of weight a tick can gain from a single blood meal was incorrect. Though ticks can consume more than 200 times their weight in blood, they salivate much of the water in the blood back into the host. Total weight gain is thus closer to 100 times the unfed weight. This is equivalent to an average U.S. man gaining nearly 20,000 pounds in a single meal.