A mouse scurries across a round table rimmed with Dixie cup–sized holes. Without much hesitation, the rodent heads straight for the hole that drops it into a box lined with cage litter. Any other hole would have led to a quick fall to the floor. But this mouse was more than lucky. It had an advantage — human glial cells were growing in its brain.

Glia are thought of as the support staff for the brain’s nerve cells, or neurons, which transmit and receive the brain’s electrical and chemical signals. Named for the Greek term for “glue,” glia have been known for nearly 170 years as the cells that hold the brain’s bits together. Some glial cells help feed neurons. Other glia insulate nerve cell branches with myelin. Still others attack brain invaders responsible for infection or injury. Glial cells perform many of the brain’s most important maintenance jobs.

But recent studies suggest they do a lot more. Glia can shape the conversation between neurons, speeding or slowing the electrical signals and strengthening neuron-to-neuron connections. When scientists coaxed human glia to grow in the brains of baby mice, the mice grew up to be supersmart, navigating tabletops full of holes and mastering other tasks much faster than normal mice. This experiment and others suggest that glia may actually orchestrate learning and memory, says neuroscientist R. Douglas Fields.

“Glia aren’t doing vibrato. That’s for the neurons,” says Fields, of the National Institute of Child Health and Human Development in Bethesda, Md. “Glia are the conductors.” They may be telling neurons when and where to send their signals and how loud those signals should be. Scientists are beginning to get a sense of how glia coordinate the brain’s intricate symphony of signals, Fields says.

Accepting glia’s role in learning and memory has been a gradual progression, says Andrew Koob, a neurobiologist at the University of Wisconsin–River Falls. Neuroscientists have been focused on neurons because neurons tend to be bigger than glial cells and their electrical signals have been easier to study. And much research on the brain’s information processing is focused on synapses, the communication junctions where chemical messages are passed between neurons.

Oligodendrocytes (green) and astrocytes (red) are glial cells that influence the way chemical and electrical signals travel from neuron to neuron (blue) and may shape the way information is stored. A third type of glia, microglia (yellow), help protect the brain.

“The popularization and perception that the neuron is the only active cell type in the central nervous system is very pervasive. It is learned early on,” Koob says. “This leads into the long-held belief that learning and cognition are solely the domain of neurons.”

But even though neurons are often bigger, and definitely more famous, glia outnumber nerve cells in the brain. Glia come in three varieties: microglia, astrocytes and oligodendrocytes. Tiny microglia puff up and pounce on invaders that enter the brain, using chemical warfare to kill infiltrators, while devouring dead and dying cells. Microglia also prune and clear away unnecessary nerve cell connections (SN: 11/30/13, p. 22).

Astrocytes nestle some of their pointed projections against synapses, playing a role in how neurons make connections. Other astrocyte projections connect to nearby capillaries, helping to bring oxygen-rich blood to the neurons. The third glial class, oligodendrocytes, supports neurons by wrapping the neurons’ long, wiry fibers called axons in myelin, a fatty protective substance better known as the brain’s white matter. It may take several oligodendrocytes to cover one long axon with the myelin it needs.

Neuroscientists began to notice in the early 1990s that glia are more than just the support crew for neurons. A group of researchers including Stephen Smith, now at Stanford University, had a hunch that glia could communicate via chemical signals, as neurons do. Smith and his colleagues dribbled glutamate — a chemical messenger commonly used by neurons — into a dish containing astrocytes modified to glow when calcium levels go up. Where the drops hit, the cells immediately flashed. After a short delay, more cells flashed and waves of fluorescence moved through the dish. The glutamate was spurring astrocytes to release fluorescent-tagged calcium ions, signals that the glia were using to communicate, Smith’s team reported in Science in 1990.

Four years later, Maiken Nedergaard, now at the University of Rochester Medical Center in New York, showed that astrocytes not only talked among themselves using calcium signals, but also used the signals to communicate with neurons.

In the two decades since then, neuroscientists have been studying astrocytes and their signaling in various animals. Human astrocytes are 2.6 times longer than mouse astrocytes and move calcium-ion waves through the brain at speeds five times faster than rodent astrocytes do. Humans also have subtypes of astrocytes that don’t appear to exist in mouse and rat brains, Nedergaard and colleagues reported in 2009 in the Journal of Neuroscience. Interlaminar astrocytes, for example, extend long fibers through the cortex, the outer part of the brain, which is involved in higher thought processes such as learning, memory and creativity.

The three types of glia have different roles in the brain. When these cells don’t work properly, neurological disorders and diseases can result. 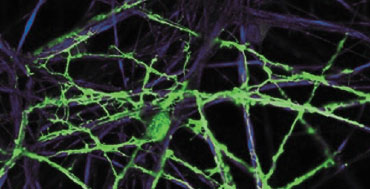 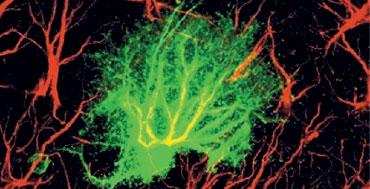 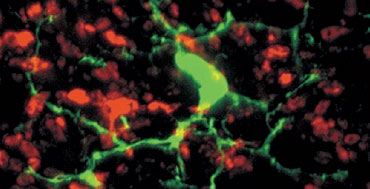 Based on differences in mouse and human astrocytes, Nedergaard and colleagues wondered if inserting human glia into mice would change the way mouse brains worked. It did.

Human glial progenitor cells placed in mouse brains multiplied and then matured into astrocytes. Over several months, newly developing human astrocytes started to replace the mice astrocytes. As the human astrocytes took over, the level of calcium signals in the brain increased threefold.

The mice with human cells also exhibited greater levels of long-lasting enhancement in neuron-to-neuron communication, suggesting that the human astrocytes were strengthening neuronal connections and communication. When tested on a battery of learning and memory tasks, such as identifying the safe hole on a circular table, the mice with human glial cells quickly outperformed their mouse-brained counterparts, the team reported in Cell Stem Cell in 2013 (SN: 4/6/13, p. 16).

Neuroscientists Robin Franklin and Timothy Bussey of the University of Cambridge argued in the same issue that the results offered compelling evidence that humans’ superior learning and memory skills are at least in part due to glia.

“This is a very sexy notion,” says Marc Freeman, a neurobiologist at the University of Massachusetts Medical School in Worcester. He cautions, though, that the biology of how these glial cells work is not completely clear. There may be other explanations for the results.

Freeman, who studies astrocytes in fruit flies, is searching for the genes that fly astrocytes rely on to nudge neurons’ electrical signals along or slow them down. If those genes are also found in mice and humans, that means they’ve been conserved across species, suggesting that the genes play an essential role in the brain, Freeman says. In flies, he and others are manipulating these genes to see exactly what they do and how they affect behavior and possibly learning and memory, he says. “We are on the cusp of the glia field becoming extremely interesting.”

Astrocytes and oligodendrocytes may influence learning and memory by helping neurons keep their electrical signals flowing at a healthy rhythm. Groups of neurons fire electrical signals in rhythmic patterns called oscillations. A rhythm of roughly 25 to 80 pulses per second may be important for learning and memory, some studies indicate. Last year, an international team of researchers working with mice found that astrocytes’ release of brain chemicals, including glutamate, is essential to maintaining a rhythm of 25 to 60 surges per second. When scientists engineered mice so their astrocytes could not release glutamate and other brain chemicals, the rodents’ regular surges deteriorated. Without the oscillations, the mice spent less time than healthy mice exploring new objects, the researchers reported in the Proceedings of the National Academy of Sciences.

Oligodendrocytes, on the other hand, may influence neuronal signaling rhythms via myelin rather than brain chemicals. Scientists first speculated that oligodendrocytes were important for learning and memory when MRI brain scans revealed structural changes in the myelin-wrapped white matter in children, teens and adults learning to play piano and in adults who learned to juggle. The jugglers’ brains showed increased white matter at the back of their right intraparietal sulcus — a crease at the back of the brain that helps with visually guided grasping of objects. Individuals who weren’t learning the new skill showed no changes.

View a video of mice running on oddly runged wheels

As an adult learns a new skill like juggling, the brain may be churning out new oligodendrocytes, which then wrap extra myelin around the axons of the neuronal circuits being built. A recent study in mice supports the idea. Adult mice learning to run on a wheel with oddly spaced rungs made oligodendrocytes more quickly than mice with no wheel to run on. And engineered mice that could not make new oligodendrocytes were unable to master running on the more complex wheel, William Richardson of University College London and colleagues reported in Science in 2014. Adult brains in mice, and possibly in humans, need to make new glia and myelin to learn and remember, Richardson and colleagues argue.

Myelin speeds the transmission time of electrical signals along axons. It takes a signal 30 milliseconds to cross from the left to the right side of the brain on myelinated axons. A similar signal takes about 300 milliseconds on un-myelinated axons. Slight changes in the thickness of myelin layers on axons may tweak the timing of the brain’s electrical signals just enough to bolster learning and memory or do damage, Fields and colleagues calculated.

Synchronizing these signals is essential to getting sets of neurons in different regions of the brain to fire at almost exactly the same time, a coordination that sets the foundation for brain circuits to store information. Delays shorter than even a millisecond could prevent a signal from arriving at exactly the right time, Fields and colleagues reported in Neuroscience in 2014. They suggest that signal delays can disrupt synchronization, something that may contribute to autism by destroying the consistency of brain rhythms. Certain rhythms are also slower in one region of the brain in individuals with schizophrenia, the researchers note. These and other data suggest that some neurological disorders may result from damaged glia rather than damaged neurons.

The weight of all this recent research has forced neuroscientists to rethink the hierarchy among cells in the brain. Glia are coming out of the shadows. Neurons and their synaptic connections might need to start sharing the spotlight.

“We’ve been stuck in the synapse for 150 years,” Fields says. “It’s time to move out to the enormous unexplored space that’s out there.”

This article appeared in the August 22, 2015 issue of Science News with the headline, “Maestros of Learning and Memory: Glia prove to be more than the brain’s maintenance crew.”