At 10:37 a.m. local time on March 22, as much as 5 million cubic meters of sediment slid down a hillside outside Oso, Wash., killing dozens and damming a stretch of the North Fork of the Stillaguamish River. The debris scraping and bouncing downhill generated seismic waves like those unleashed during an earthquake.

The pattern of these ground vibrations, recorded at regional seismic stations, allowed geologists to decipher the landslide’s sequence of events. The stations first detected a roughly two-minute rumble, probably from a part of the hill that had experienced a landslide in 2006, says Kate Allstadt of the Pacific Northwest Seismic Network. The Stillaguamish River, she says, has been cutting into the toe of that landslide’s debris pile and destabilizing it. Recent heavy rains may have further weakened the hillside, contributing to its collapse.

About five minutes after the onset of the initial event, seismic stations picked up a second, less energetic two-minute slide, probably consisting of material upslope of the 2006 slide area. Smaller falls continued over the next few hours like aftershocks. The area has a history of notable landslides. Tracking landslides with seismic signals may one day allow the monitoring of these disasters in real time and in remote regions (SN: 4/20/13, p. 11). 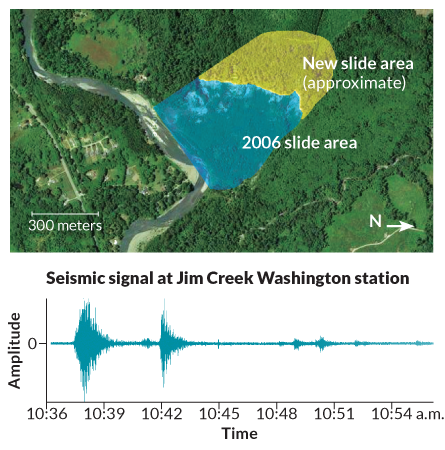 The Oso landslide appears to have originated on a slope of the Cascades that had previously collapsed in 2006 (top). A seismic station 11 kilometers away recorded the initial slide, starting at 10:37 a.m. (bottom). At 10:42, the station detected a second big slip farther uphill.  From top: ©2014 Google, CNES, Spot Image, Digital Globe, USGS, USDA; PNSN