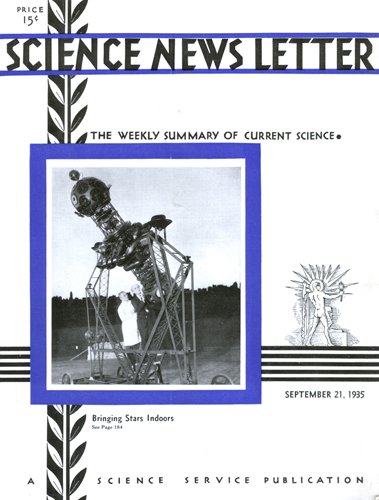 The Hayden Planetarium of the American Museum of Natural History in New York City will open on Thursday, October 3, F. Trubee Davison, president of the Museum, has announced.

Six times each weekday and five times on Sunday, the stars will go on parade in the $650,000 structure. Forty-minute lectures will be given at each planetarium showing, during which the audience of 750 will be shown the positions of the so-called fixed stars from 3000 B.C., when Alpha Draconis, brightest star in the constellation The Dragon, was the north star, to the year 13,935 A.D., when the star Vega, now overhead, will be the north star. The motions of the planets through the constellations can be speeded up to take only a few minutes. The swinging of the celestial pole around in a circle, which in the sky takes 26,000 years, can be shown quickly.

Projection apparatus, built by the German optical firm of Zeiss, was purchased through funds supplied by Charles Hayden, in whose honor the planetarium is named. An R.F.C. loan, to be repaid out of the nominal admission fee, completed the erection of the structure.

Dr. Clyde Fisher, curator of astronomy of the Museum, will be active head of the planetarium, with William H. Barton Jr. as assistant curator.

HEAVY NEON IS CONCENTRATED TO PURITY OF 99 PERCENT

Preparation of 99 percent pure “heavy” neon, the gaseous element most widely known for its use in reddish advertising signs, was announced before the meeting of the British Association for the Advancement of Science in Norwich, by Dr. Gustav Hertz of the Siemens-Halske Company, Berlin.

The achievement is comparable with the concentration of pure heavy hydrogen for which Prof. Harold C. Urey, Columbia University, recently was awarded the Nobel Prize in Chemistry, because of the importance of neon in experiments on atomic structure.

Ordinary neon gas consists of two isotopes that are chemically indistinguishable but have different atomic weights. The lighter and predominating fraction has an atomic weight of 20, and the heavier one a weight of 22. As found naturally, they occur in the proportion of nine to one, respectively, and give the average atomic weight of 20.2.

Dr. Hertz’s concentration of the mass 22 kind of neon makes the second case where an isotope has been separated in usable quantities. Hydrogen’s heavy isotope is the other.

To Prof. Robert Grant Aitken, veteran director of Lick Observatory, Mt. Hamilton, Calif., goes the credit for what may be the astronomical measurements that will help decide the long-continued controversy on the age of the universe, Sir James indicates.

Prof. Aitken has just published the newest edition of his famous treatise on binary, or twin, stars which rotate about one another far out in space like balls on the ends of a dumbbell.

The orbits and the relative masses of the two parts of such binary stars can be used to calculate their age and, hence, some minimum age for the universe. New data given in Prof. Aitken’s book, reports Sir James, can be used in calculations that are in good agreement with the so-called “long time” scale for the age of the universe, or 10,000 billion years.