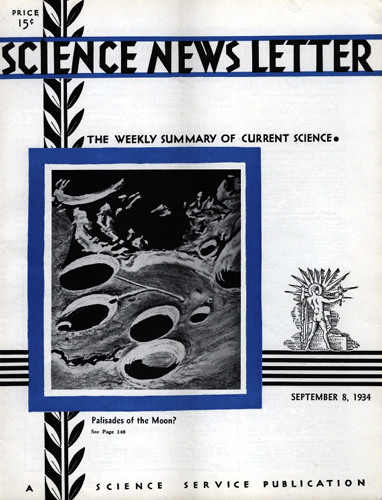 CLEFTS OR “CANALS” ARE NOW DISCOVERED ON THE MOON

“Ditchlike,” straight-line depressions on the surface of the moon are exciting the interest of astronomers.

“Canals,” some observers have been tempted to call them, by analogy with the famous and oft-disputed markings on the planet Mars.

The Journal of the British Astronomical Association has brought some newly recorded markings on the moon to the attention of European scientists through the publication of drawings by L.F. Ball, fellow of the Royal Astronomical Society. Mr. Ball has made the drawings available to America through Science Service. One of them is shown on the cover of this week’s Science News Letter.

Some of the moon “ditches” are so straight and regular that uninformed observers might believe they were dug by the hands of a lost race of moon-men. Astronomers call the regular markings “clefts.”

In the region of Weigel four great moon craters are shown, illuminated just at what would be sunset on the Earth, when the sun is low on the moon’s horizon and the shadows are long. Into two of the craters runs the ditchlike cleft with the forked end.

The origin of the clefts discovered on the moon is a matter of conjecture. Astronomers place no faith in any belief that they are the work of “moon-men.”

One theory says that the clefts are geological faults in the moon’s surface, that is, a place where the land suddenly sank or rose to form a cliff like the Palisades of the Hudson River.

Many of the clefts on the moon, which have been referred to as ditchlike depressions because of their appearance, are really towering cliffs. The black, dark area that looks like a ditch is the shadow of the cliff on the neighboring moon countryside.

From a gravel pit near Fertile, Minn., have been picked pieces of human bones mingled with six of the finely fashioned dart points, skillfully chipped from flint, called “Folsom and Yuma points.”

These Folsom and Yuma points are America’s most intriguing relics made by human hands. For in New Mexico, Colorado, Oklahoma, and other states, these dart points were found associated with the remains of animals that scientists are confident have been extinct in North America for at least 10,000 or 12,000 years, a period of time that takes their antiquity back far beyond the Indian tribes Columbus found on his arrival.

Now Prof. A.E. Jenks of the University of Minnesota reports in the journal Science his evidence that these pieces of man-fashioned flint have been found unmistakably buried with a human being.

“NATURE CONSISTS OF WAVES OF KNOWLEDGE IN MINDS”

Sir James H. Jeans, noted mathematical physicist, using these words has condensed reality, the very existence of human beings, and all other manifestations of the world we sense, into happenings in our brains. Thus, the “universe around us” becomes mental.

In his presidential address opening the annual British Association for the Advancement of Science [meeting] at Aberdeen, he presented striking philosophical interpretations of the new physics.

As to whether the universe is so predestined and planned that individual free will and initiative is ineffective, Sir James finds that the new physics of today is far more hopeful than the classical physics of a generation ago that gave rise to materialism.

“Can our minds change what is happening in reality, or can they only make it look different to us by changing our angle of vision?” Sir James asked. “We do not know, and as I do not see how we can ever find out, my own opinion is that the problem of free will will continue to provide material for fruitless discussion until the end of eternity.”