Stem cells can help heal long-term brain damage suffered by rats blasted with radiation, researchers report in the Feb. 5 Cell Stem Cell. The treatment allows the brain to rebuild the insulation on its nerve cells so they can start carrying messages again.

The researchers directed human stem cells to become a type of brain cell that is destroyed by radiation, a common cancer treatment, then grafted the cells into the brains of irradiated rats. Within a few months, the rats’ performance on learning and memory tests improved.

“This technique, translated to humans, could be a major step forward for the treatment of radiation-induced brain … injury,” says Jonathan Glass, a neurologist at Emory University in Atlanta.

Steve Goldman, a neurologist at the University of Rochester in New York, agrees that the treatment could repair a lot of the damage caused by radiation. “Radiation therapy … is very effective, but the problem is patients end up with severe disability,” he says. “Fuzzy thinking, a loss in higher intellectual functions, decreases in memory — all those are part and parcel of radiation therapy to the brain.” For children, the damage can be profound. “Those kids have really significant detriments in their adult IQs,” Goldman says.

Radiation obliterates cells that mature into oligodendrocytes, a type of cell that coats the message-carrying part of nerve cells with insulation. Without that cover, known as the myelin sheath, nerve cells can’t transmit information, leading to memory and other brain problems. 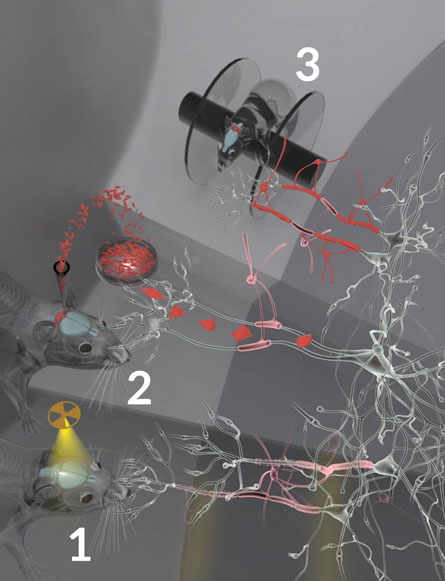 Scientists developed a technique that may one day repair some of the side effects of radiation to the brain.

1. Rats underwent radiation, which destroyed the forerunners of cells that make the insulation on information-carrying neurons.

3. The rats improved on tasks that tested their learning, memory and motor coordination, such as staying balanced on a rotating pole.

“All the highways in the brain are covered with this myelin,” says Viviane Tabar, a coauthor of the new study and neurosurgeon at Memorial Sloan Kettering Cancer Center in New York City. “You want to replenish the cells that are knocked out by radiation and … fix the deficit, the myelin problem.”

To bolster the brain’s supply of oligodendrocytes, Tabar and her team grew forerunners to the myelin-making cells from human stem cells. The researchers injected these precursor cells into different areas in the brains of 18 rats that had been given a regimen of multiple radiation doses similar to what cancer patients receive.

The researchers then tested the rats to see if their learning, memory and balance problems would improve. After 10 weeks, the treated rats performed better than the irradiated rats that had not received the infusion of new cells.

Rats given the new cells in their forebrains were better at recognizing when an object had been moved or noticing that researchers presented them with an unfamiliar object. Rats injected in their cerebellum, which is responsible for motor control, were able to trot on a rotating pole for a longer time without falling off. Rats needed injections in both parts of the brain to get all the learning and motor benefits.

The researchers also took images of the rats’ brains to track the progress of the injected cells. Most of the new cells survived and restored myelin to the denuded nerve cells.

The rats did not experience any side effects from the treatment. The new cells did not spawn any tumors or morph into other types of cells. Tabar says she plans to repeat the experiment with a larger group of rats and include treatments (such as chemotherapy) that people receive while undergoing radiation.