Along with sulfur emitted by coal-burning power plants, volcanic particles spewed high in the atmosphere reduced the amount of global warming otherwise expected during the 2000s, a new study finds.

“If you don’t include these stratospheric aerosols in the models, you’re going to overestimate how much the temperature should have increased over the past decade,” says team member John Daniel, an atmospheric physicist with the National Oceanic and Atmospheric Administration in Boulder, Colo.

Scientists had known that aerosols cool the planet, and that big eruptions spew lots of aerosols up high. But nobody had calculated how smaller recent eruptions might affect climate, and many had assumed that stratospheric aerosols from volcanoes dropped essentially to zero after particles from the 1991 eruption of the Philippines’ Mt. Pinatubo fell out of the atmosphere.

Daniel and his colleagues, led by recently retired NOAA atmospheric scientist Susan Solomon, looked at aerosol measurements taken from satellites and from the Mauna Loa observing station in Hawaii. The researchers traced aerosols to several small eruptions, including those of Soufrière Hills in Montserrat and Tavurvur in Papua New Guinea, both in 2006.

“This gives us a clearer picture of the effects of smaller volcanic eruptions,” says Alan Robock, an atmospheric scientist at Rutgers University in New Brunswick, N.J.

Manmade sulfur emissions may also account for some of the aerosols the team saw, Daniel says.

Using computer models, the researchers calculated that aerosols from all sources cooled the planet by 0.1 watts per square meter during the 2000s. In comparison, the buildup of atmospheric carbon dioxide warmed things over that span by 0.28 watts per square meter. The factors that cause such warming and cooling effects are known as forcings.

The new work “again points out that if we actually do have all the forcings correct, then our ability to reproduce and anticipate the resulting climate responses is actually very good,” says Caspar Ammann, a climate scientist at the National Center for Atmospheric Research in Boulder.

Daniel’s paper ties into recent work by Robert Kaufmann of Boston University and his colleagues (SN: 7/30/11, p. 17). That group statistically analyzed why global temperatures didn’t rise as much as expected between 1998 and 2008, and concluded that sulfur from coal-burning power plants in Asia was mainly to blame. The NOAA work “gives additional support to the conclusion that increased sulfur emissions can explain the recent hiatus in warming,” Kaufmann says.

Daniel’s team is now working to sort out the relative contributions of volcanoes versus power plants. In the short term, though, “models from here on out are going to have those volcanoes,” he says.

Back Story | THE BIG PICTURE 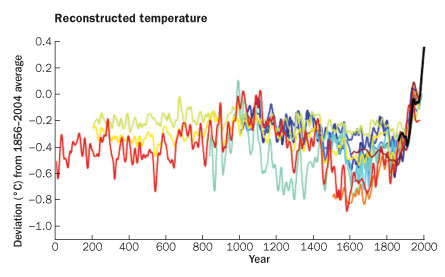 Someone looking at a graph of global temperature since worldwide instrumental records began in 1880 might reasonably conclude that the recent upward trend is not terribly extreme. But longer records are available. The ones shown here use a number of “proxy” records: tree ring thicknesses, the chemical composition of lake and ocean sediment cores, rates of coral growth and other natural phenomena that vary with temperature. Each colored line represents a slightly different interpretation of the data, but they all clearly point to the same conclusion: The past few decades have been the warmest in centuries.