Doctors may be able to detect head and neck cancers more promptly with the help of saliva.

DNA from tumors can appear in the saliva and blood plasma of patients with head and neck cancers, researchers report June 24 in Science Translational Medicine. This DNA could help identify cancer, or its recurrence, at an early stage.  Previous studies have suggested using tumors’ distinctive DNA to detect cancer, says head and neck surgical oncologist Nishant Agrawal of Johns Hopkins University School of Medicine, a coauthor of the paper. This study identified head and neck cancers with surprising accuracy, he says.

The results suggest that it may be possible to detect cancer in saliva from high-risk patients even before symptoms develop, says epidemiologist Eduardo Franco of McGill University in Montreal. “That would be good, because we don’t have any screening test for head and neck cancer,” he says. More than 50,000 Americans are diagnosed with head and neck cancers annually, accounting for about 3 percent of cancers in the United States.

A saliva test could be administered at a dentist’s office or even at home, says cancer geneticist Bert Vogelstein of Johns Hopkins, one of the study’s coauthors. 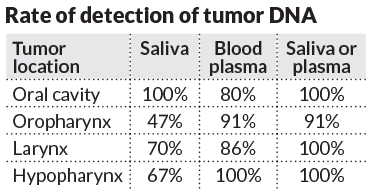 Researchers found tumor DNA in saliva and blood plasma samples from head and neck cancer patients. Saliva samples were most effective for detecting cancers in the oral cavity, while plasma samples picked up most cancers lower in the throat and neck. Sampling both blood and plasma identified cancers in 96 percent of patients tested.

Tumors shed DNA fragments into surrounding bodily fluids. These fragments can contain distinctive genetic changes associated with cancer, and may also contain DNA from human papillomavirus, which causes an increasing fraction of head and neck cancers.

Tumor DNA appeared in every patient with early stage cancer and indicated the presence of recurring cancers before clinical diagnoses. Whether initial or recurrent, detecting cancer early can improve quality of life and survival rates, Agrawal says.

Still, Franco and Grandis agree that the study is an encouraging start.

“There’s good reason to be excited,” Franco says. “This is very promising.”