The way it boosts neural development in babies and protects the hearts and minds of adults, fish could be considered a health food. Yet the methylmercury pollution that taints fish worldwide can erase these advantages and even trigger profound mental and cardiovascular harm. Several new papers now suggest strategies by which American diners can negotiate the mercury minefield to tap dietary benefits in fish.

Their authors also call for reform of federal guidelines that can confuse consumers on mercury risks from fish.

Mercury is a global pollutant. Some comes from local industrial sources, such as smelters or coal-fired power plants. Some falls out of the atmosphere from distant polluters. There are natural sources, such as erupting volcanoes. And some just remains as a pervasive legacy of historical releases.

Once elemental mercury gets into water, certain bacteria methylate it into its most toxic form, which explains how fish become such a rich dietary source of the toxic metal. The amount of methylmercury that a fish accumulates will rise with mercury contamination in its home waters and also with how high its species resides in the food web — with top predators like shark, swordfish and tuna at the apex. Two of the new studies focused on tuna, the most widely consumed top predator fish.

At least in the United States, groceries and restaurants do not typically identify fresh tuna by species. Yet mercury contamination can vary dramatically within a family like tuna, often owing to each tuna species’ average size. So Jacob Lowenstein of Columbia University and his colleagues used genetic analyses to identify by species the fish in 100 samples of sushi tuna. These came from high-quality fresh steaks and were purchased at 54 local restaurants and 15 supermarkets.

They traced the sushi to bigeye, bluefin and yellowfin tunas. Their measurements indicated that a typical serving of each type would exceed the U.S. Environmental Protection Agency’s recommended daily limit on mercury of 0.1 microgram per kilogram body weight.

As anticipated, Lowenstein says, mercury tended to increase with fish size, with yellowfin the lowest and bluefin the richest source. What he hadn’t expected to find: Restaurant cuts, on average, contained 50 percent more mercury — roughly 0.75 part per million — than supermarket tuna sushi. EPA’s action level, a recommended maximum, is 0.5 ppm for mercury. And although most restaurant sushi hovered around that level of contamination, plenty hosted 1 to 2 ppm, greatly exceeding the upper range of almost all supermarket sushi.

The U.S. Food and Drug Administration has its own action level for mercury, which applies to commercially sold seafood. At 1 ppm, it’s twice the EPA limit (which applies only to consumer catches of sport fish). A couple of samples of supermarket sushi and roughly 15 restaurant samples exceeded even FDA’s less stringent federal safety limit.

Owing to the high mercury contamination in some of the sushi samples, Lowenstein’s group concludes that “[government] health agencies should consider adding bigeye and bluefin tuna to mercury advisories” — fish to be avoided by especially vulnerable groups, such as pregnant and nursing women or young children.

His team reports its findings online the week of April 19 in Biology Letters, ahead of print.

Shawn Gerstenberger and his colleagues at the University of Nevada Las Vegas took on the more prosaic form of this fish: canned tuna. About 1 billion pounds of it are purchased every year in the United States, accounting for at least one-quarter of domestic seafood consumption.

The toxicologist and his team initially bought 155 cans of solid-white, chunk-white and chunk-light tuna. All came from three of the most popular national brands. The white consists of albacore only; light is mostly skipjack tuna.

In the February Environmental Toxicology and Chemistry, they report finding that average mercury concentrations in all three brands of tuna exceeded EPA’s 0.5 ppm advisory, and the average for one brand was more than 0.7 ppm. Depending on the brand, 4 to 7 percent of the tuna surpassed even FDA’s action level.

Canned tuna is a low-cost, low-fat source of protein. Indeed, it’s subsidized as a good source of nutrition by the federal Women, Infants and Children program. However, because of his team’s new data, Gerstenberger argues that “stricter regulation of the mercury in canned tuna is necessary.” At 0.5 ppm mercury in canned tuna, a 25-kilogram (55-pound) child can safely eat only one serving every two weeks, his team calculates. Increase that contamination to 0.77 ppm mercury, the average for one of the brands his group tested, and the same child should not eat a serving of tuna more than once every three weeks and two days, they calculate.

Gerstenberger would like to see FDA and EPA develop a clear, consistent policy on how much mercury can be eaten safely.

Environmental scientist Edward Groth III agrees but hopes it won’t be FDA’s limit, because after reviewing the literature on mercury toxicity to the brain and heart he concludes that “One ppm is certainly not a safe level of mercury in fish.”

Groth, a New York City–based consultant, pored over FDA’s database for mercury contamination in 51 different varieties of fish and found a 100-fold difference from the least contaminated (shrimp, tilapia and clams) to the most tainted (tilefish from the Gulf of Mexico). In the April Environmental Research, Groth reviews relative mercury concentrations by fish type and then groups popular ones by mercury level into a chart (see below) that can fit into a wallet.

Fish in the very low category — which besides shellfish includes sardines, salmon, freshwater trout and marine perch — comprises 43 percent of the U.S. seafood market “but collectively provide only 9.1 percent of mercury inputs,” he reports. In contrast, he notes, those fish in the three most contaminated categories account for 9 percent of U.S. seafood sales but 40 percent of the nation’s likely mercury consumption from FDA-listed fish.

At a meeting beginning June 7 in Stockholm, world leaders will launch international negotiations aimed at developing a United Nations treaty to limit global mercury emissions. Such deliberations can draw out over years, and any limits on future emissions won’t eliminate mercury entirely from fish.

Despite mercury’s lingering presence, Groth maintains, “everybody should eat fish — more than most now eat.” Yet until now, he says, “consumers haven’t had the information they need to make smart decisions.” But emerging data are identifying some lower contaminated species, he says, and by focusing on them, most consumers should be able to avoid harmful exposures. 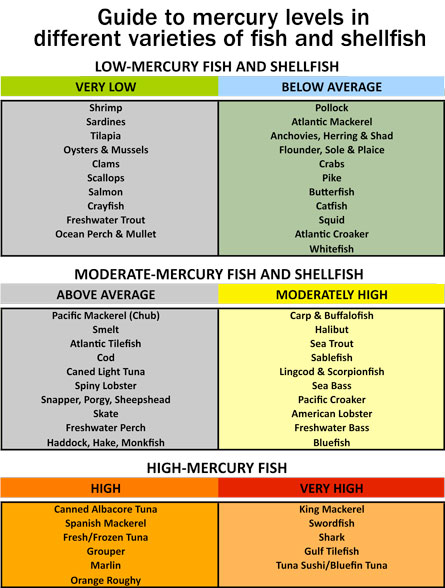