If so, then many of these ecosystems are particularly vulnerable to future changes such as rising temperature, scientists say. With just slight shifts in rainfall or other factors, people living in what is now tropical rainforest might suddenly find themselves in scrubland populated by a different mix of plants and animals — where people’s livelihoods might have to change dramatically.

“That transition is not going to happen smoothly,” says Milena Holmgren, an ecologist at Wageningen University in the Netherlands. “The evidence is showing there are these big jumps.”

Holmgren and her colleagues describe the finding in the Oct. 14 Science. Another group, from Princeton University and South Africa’s national research council, report similar conclusions in a second paper in the same journal.

In theory, the relationship between rainfall and tree cover should be straightforward: The more rain a place has, the more trees that will grow there. But small studies have suggested that changes can occur in discrete steps. Add more rain to a grassy savanna, and it stays a savanna with the same percentage of tree cover for quite some time. Then, at some crucial amount of extra rainfall, the savanna suddenly switches to a full-fledged forest.

But no one knew whether such rapid transformations happened on a global scale. Separately, both research groups decided to look at data gathered by the MODIS instruments on board NASA’s Terra and Aqua satellites, which sense vegetation cover and other features of the land surface. This information included how much of each square kilometer of land was covered by trees, grasses or other vegetation. Both teams focused on the tropics and subtropics of Africa, South America and Australia, because those areas are thought to be least disturbed by human activity.

Fire may be another important factor in determining tree cover, as the second group found. Led by Princeton ecology graduate student Carla Staver, this team studied how fire helped differentiate between forest and savanna. Fire spreads quickly in savannas because of all the grasses and slowly in tree-dense forests. “There’s a tipping point between where you get fires spreading easily and where you don’t,” Staver says.

That point, she and her colleagues found, sits at a tree cover of about 40 to 45 percent. Below that number, fires spread easily and prevent new trees from establishing themselves. Above that number, trees work to maintain a thick canopy that acts as a barrier to stop fire from spreading.

“These two papers tell us that these feedbacks really do operate at all scales,” says Audrey Mayer, an ecologist at Michigan Technological University in Houghton. “They’ll make us have to redo some of our assumptions about how things are going to change in the future.”

Many global climate models, for instance, assume a smooth transition between savanna and forest as temperature and rainfall change. But the new work suggests that forests could appear or disappear quickly, Mayer says, especially if people complicate the picture. “You can’t just plant a couple of trees and they’ll grow up and the forest will come back,” she says. “You have to fight those internal feedbacks.”

Staver and her colleagues are now searching for savanna-forest transitions that are occurring right now. “These things are definitely happening,” she says, “and the new work tells us it could be even more widespread than we’d thought.” Studying where landscapes are changing could help the scientists better understand what causes ecosystems to tip from one category to the other.

For their part, the Dutch scientists have developed “resilience maps” that show which places are most likely to tip from savanna to forest or vice versa. Farmers scratching out a living in western Africa or ranchers running cattle on the fringes of the Amazon might use such maps to learn how viable their livelihoods are likely to be in coming decades.

Locals could thus spend more time and energy working to keep the ecosystem the way it is, perhaps by building extra capacity for storing water or by cutting back on logging. Or residents could cut down more trees to tip a forest into a grassy rangeland for their animals. “These maps can be a tremendous tool for all kinds of organizations,” Holmgren says.

Mayer says she’d like to see the analysis extended into the Northern Hemisphere, where she suspects the results might be the same. Across parts of Illinois and Indiana, for instance, stretches a narrow strip of tallgrass prairie surrounded by forests dubbed the “prairie peninsula.” The peninsula was probably kept grassy by centuries of fire and grazing management — because otherwise it, too, would revert to forest.

Back Story – Eyes on high 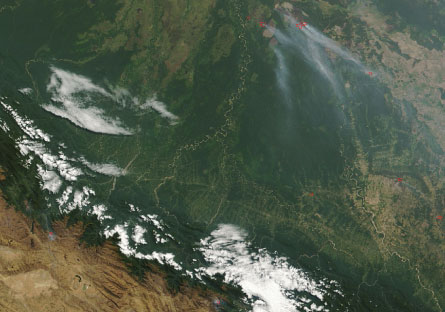 A lot of what scientists know about changes on Earth’s surface comes thanks to two remote-sensing instruments called MODIS, for Moderate Resolution Imaging Spectroradiometer. One MODIS launched in 1999 on NASA’s Terra satellite, and a second soared into space three years later aboard the sister Aqua satellite. By regularly measuring a wide range of light and other radiation reflecting off the Earth’s surface, MODIS can build up a high-resolution picture of changes in planetary phenomena such as cloud cover, deforestation and even the smoke from forest fires in Bolivia seen at left. Terra passes over the equator every morning, and Aqua does so every afternoon. Together they see the entire Earth’s surface every day or two — making them an all-seeing, never-sleeping eye in the sky for environmental dynamics.