Agriculture’s most effective pesticides are rapidly losing their punch as weeds evolve resistance to the chemicals. With no game-changing alternatives in the pipeline, researchers warn that farmers could soon see crop yields drop and production prices climb.

“It’s what Chuck Darwin talked about back in 1850. Organisms evolve in response to selection pressures in their environment,” says Micheal Owen, an extension weed scientist at Iowa State University in Ames. “In essence, the better we get at controlling weeds, the more likely those efforts will select for survivors that do not respond to controls.”

In the June 8 Journal of Agricultural and Food Chemistry, Owen and other researchers describe a rapid rise of herbicide-resistant weeds and a particularly threatening trend: an increasing number of weeds that are simultaneously immune to multiple herbicides.

Headlines and summaries of the latest Science News articles, delivered to your email inbox every Friday.

Weeds are thieves. They rob crops of moisture, nutrients, sunlight — and eventually yield. Since the dawn of agriculture, farmers and weeds have waged a nonstop battle. But their arms race changed overnight with a rollout of crops, beginning in 1996, possessing a genetically engineered immunity to glyphosate, the active ingredient in a broad-spectrum weed killer known as Roundup. Growers could now use glyphosate repeatedly, all season long, without fear of killing their crops.

“No herbicide has ever been used to the extent glyphosate has,” says Stephen Duke of the U.S. Agricultural Research Service in University, Miss. One price has been a rapid evolution of weeds resistant to it. And their proliferation “has been fairly dramatic in the last two to three years,” he says.

“Today, 98 percent of U.S. soybeans, 88 percent or so of U.S. cotton and more than 70 percent of U.S. corn come from cultivars resistant to glyphosate,” Owen reports. Reliance on these crops — and an accompanying weed-control strategy that employs glyphosate to the exclusion of other herbicides — “created the ‘perfect storm’ for weeds to evolve resistance,” Owen and Jerry Green of Pioneer Hi-Bred International in Newark, Del., argue in their new analysis.

But the only thing unique to glyphosate — in terms of breeding weed resistance — is the extent of its use.

In an article in the same issue of the journal, Carol Mallory-Smith of Oregon State University in Corvallis chronicles the emergence of a noxious weed, jointed goatgrass. Its resistance to the herbicide imazamox is evolving in fields planted with wheat conventionally bred to be immune to imazamox. Here, the weed scientist explains, resistance traces not to herbicide overuse, but to the spread of resistant genes in the pollen of wheat, the weed’s distant cousin, through interbreeding.

The irony, Mallory-Smith says, is that farmers have found the imazamox-resistant wheat such a high performer that many actually apply little or none of the herbicide to which it’s immune.

If growers had, the weed killer would have knocked out much of the goatgrass invading their fields. But because it’s left untreated, the goatgrass survives to accept pollen from the wheat — and in so doing, creates hybrids that incorporate its cousin’s resistance to the weed killer. Although farmers can target the goatgrass with other herbicides, doing so would also risk killing the wheat.

Weeds immune to one herbicide will generally also prove insensitive to others employing the same mode of action — usually the chemical’s disruption of an essential enzyme function in the plant. For some major crops, weeds have already countered most common modes of poisoning, notes Patrick Tranel of the University of Illinois at Urbana-Champaign.

Common waterhemp has risen to become one of the most serious weeds in Midwest corn and soy. In a study also appearing in the June 8 Journal of Agricultural and Food Chemistry, Tranel’s team reports finding waterhemp simultaneously immune to as many as four functional classes of herbicides — including glyphosate. In March in Pest Management Science, the team reported waterhemp’s resistance to yet a fifth herbicide family.

Waterhemp already exhibits immunity to three of the four functional classes of herbicides federally permitted for use on emerging weeds in soy, Tranel notes. The remaining one doesn’t work well on weeds six or more inches high — and is toxic to glyphosate-resistant soy. “So,” he says, “I’m not exaggerating when I say, at least for soybeans, we’re on the verge of running out of options.”

And Stephen Powles of the University of Western Australia, in Perth, notes that in his country, some weedy ryegrass species “can be resistant to seven different herbicide types, meaning there are almost no herbicides which still work.”

Herbicide makers have encouraged farmers to embrace the mantra KISS — for keep it simple, stupid , says Jonathan Gressel of the Weizmann Institute of Science in Rehovot, Israel. He and other weed scientists now argue that only the opposite approach will stall the growing evolution of herbicide resistance in weeds. Scientists advocate rotating crops on a given field, applying several different herbicides and considering use of additional physical treatments (such as burning or minimum tillage). Gressel would also go so far as to recommend quarantining fields where resistant weeds initially turn up.

Unfortunately, Owen says, farmers think they can continue using simpler herbicide-centered strategies “as they wait for industry’s next silver bullet.” But novel herbicides are not on the horizon, he says, so diversity of weed management must be.

The International Survey of Herbicide Resistant Weeds monitors the amount of crop acreage worldwide that is affected by chemical-resistant plant pests. Wild oats tops the list, but in the United States the biggest problems are common water hemp, Palmer amaranth and horseweed, says survey director Ian Heap. Palmer amaranth may be the most serious threat to crops, he says, because it’s immune to so many different classes of herbicide. 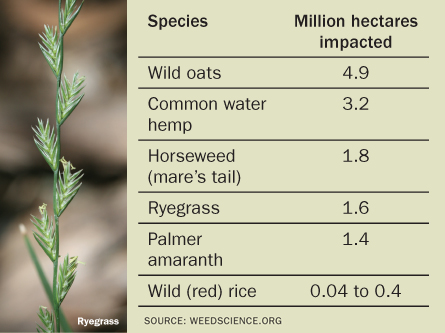