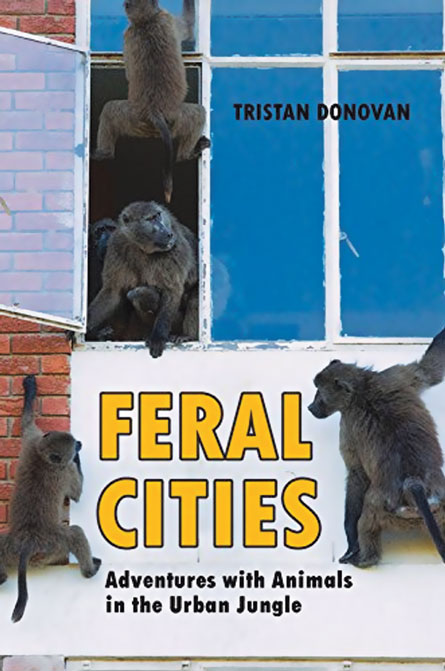 It’s not really true that a baboon carjacked vehicles in Cape Town, South Africa. Yes, the big monkey liked to climb in, scaring people out of their cars and their wits. The baboon would rifle through the car for food, minding to check the glove box. But it didn’t drive off.

Tourists were easy marks, getting out to take pictures and leaving car doors open. The seasoned baboon just outran people to their cars. Word got around to lock car doors when getting out to look at roadside baboons, but the creature soon learned that cars making a beeping sound often have unlocked doors.

In Feral Cities, journalist Tristan Donovan explores the conflict zone of cities and wild animals, and he seems to have a good time doing it. Observers were stunned to find a fox living on the 72nd floor of the unfinished Shard skyscraper in London, dining on scraps of workers’ meals. Donovan says that this shouldn’t have come as a surprise. While there is about one fox per square mile in rural England, in cities it’s up to 14.

London’s wildlife pales in comparison to that of Jaipur, India. It hosts thousands of rhesus macaque monkeys, and they’re all thieves. Groups of monkeys raid fruit stands using a standard MO. One monkey distracts the tender. When the human gives chase, several others steal the goods. Monkeys are protected by the Hindu religion, so efforts to run them out of cities have been halfhearted. The result: The fraction of macaques in India that have had any contact with humans has increased from 15 percent in 1980 to 86 percent today.

Monkeys and other animals choose to live in cities for some of the same reasons we do — the dining is great. Bears, for instance, know that dumpsters contain cold pizza. But bears are drawn to more than pizza. For example, elk often show up in Banff, Canada, to calve their young in a safe neighborhood and eat up gardens. Before long, the neighborhood goes south: Grizzly bears show up to hunt the elk.

Some transplants are easily spotted, such as parakeets in Brooklyn or boars in Berlin. But leopards are practically invisible urban denizens in western India. There, a biologist fitted a tracking collar on an old leopard that had survived a fall down a well. Over three months, the big cat moved through a settlement, crossed busy roads and railroad tracks, chased dogs down streets and passed through an industrial park just outside Mumbai — without being reported by anyone.

Urban ecology is a new area of science that still harbors secrets (SN: 1/10/15, p. 18). Cities are “the least understood ecosystems on the planet,” Donovan says. “They are places where much of what we think we know about the natural world doesn’t apply.”

Buy Feral Cities from Amazon.com. Sales generated through the links to Amazon.com contribute to Society for Science & the Public’s programs.