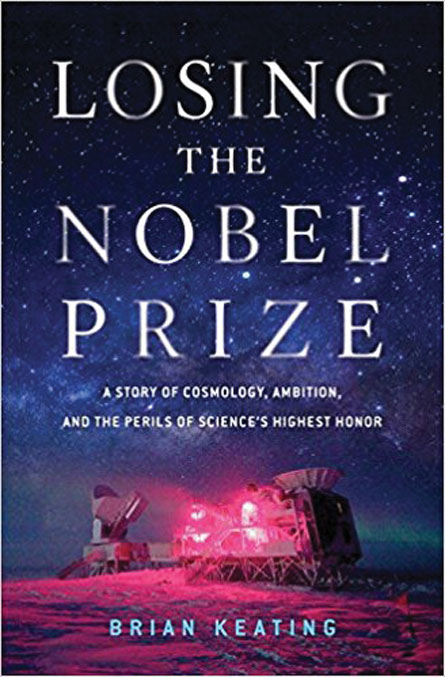 Dust may seem insignificant, but in science, it can cost you a Nobel Prize.

That’s what happened to Brian Keating, a major contributor to the BICEP2 team that claimed in 2014 to have found the first definitive evidence of cosmic inflation (SN: 4/5/14, p. 6), a period of extremely rapid expansion just after the Big Bang. Months later, the evidence crumbled: A swirling pattern, seen in light released 380,000 years after the universe’s birth, was due to cosmic dust bunnies, not inflation (SN: 2/21/15, p. 13). Keating’s Nobel dreams disintegrated.

The most coveted of scientific honors, the Nobel Prize was a major motivator for Keating. But in Losing the Nobel Prize, Keating questions whether the award is good for science. He argues the prize punishes collaboration by rewarding at most three scientists for each discovery and concentrates already limited scientific funding into fields favored by laureates. Plus, the prize has a bias problem: Despite many deserving candidates, only two women have won the physics Nobel.

Likewise, idolatry of that shiny Nobel medal can lead scientists to make bad decisions, especially because the first group to announce big results will usually garner the glory. In one cringeworthy passage, Keating describes how BICEP2 scientists decided to share their findings with the world. Leaders of the experiment, which used a telescope at the South Pole to search for signs of inflation, were concerned that a competitor experiment was hot on the trail. So the team unveiled its results despite some of the evidence resting on dubious foundations. Using this story as a cautionary tale, Keating suggests options for revamping the prize, including shifting its focus to serendipitous discoveries and giving it to groups of scientists.

Losing the Nobel Prize dissects the error-prone humanity of science, but cuts the ugly details with beauty. Keating writes of BICEP, the predecessor to BICEP2, as if it’s his adopted child. Even more so, his actual family is entwined with his science. While studying the origins of the universe, he attempts to understand his own origins: In graduate school, Keating reunites with his estranged father.

Charming and clever, Losing the Nobel Prize bounces between clear explanations of nitty-gritty science, accounts of personal relationships and historical lessons. Dust, it turns out, has foiled many astronomers before Keating, adding a confounding haze that has altered how scientists have understood the universe over the centuries.

When dust gets in our eyes, we can see things that aren’t there. The same goes for the gleam of the Nobel Prize.

Buy Losing the Nobel Prize from Amazon.com. Science News is a participant in the Amazon Services LLC Associates Program. Please see our FAQ for more details.