On Feb. 4, President Bush announced his proposed research and development (R&D) spending blueprint for 2009. It echoed his embattled plan from last year. 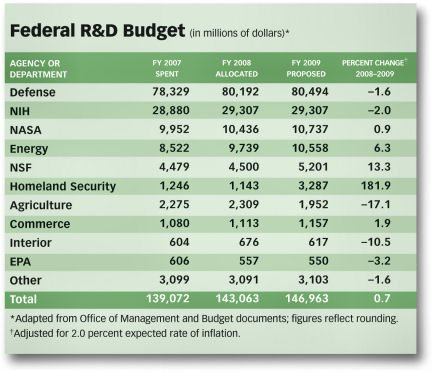 Federal support for R&D, totaling $146.9 billion, would pump up funds for physical sciences but not for biomedical research. Last year, Congress overrode those priorities, and analysts predict a similar fight this year.

The President’s request includes $5.2 billion in research funds for the National Science Foundation (NSF), a 13.3 percent increase over fiscal year (FY) ’08, and $4.72 billion for the Department of Energy’s (DOE) Office of Science, a 16 percent increase (percent changes have been adjusted to account for a 2 percent rate of inflation estimated for the current fiscal year).

Such boosts would be on pace to match the administration’s goal, stated 2 years ago, of doubling R&D funding in the physical sciences within 10 years to maintain the nation’s competitive edge. They also mirror administration statements about reining in biomedical-research spending.

The administration’s agenda “has been fairly consistent,” says Kei Koizumi, director of the R&D Budget and Policy Program at the American Association for the Advancement of Science in Washington, D.C. Indeed, with many parts of the overall federal budget slated for big cuts, Koizumi says, science is faring surprisingly well.

In the past 2 years, Congress did not fund the President’s requested increases for physical sciences, which would have largely come at the expense of biomedical research.

Last year, in particular, science funding was caught in a stand-off between the administration and Congress. Under threat of a presidential veto, and trying to conclude the budget process before the holiday recess, Congress had to find places to cut, and boosts for physical sciences shriveled.

The 2009 proposal is encouraging for particle physicists. “In my best hopes, that’s what I wanted to see,” says Pier Oddone, director of the Fermi National Accelerator Laboratory in Batavia, Ill., home to the world’s most powerful particle accelerator.

Fermilab and the Stanford (Calif.) Linear Accelerator Center—both funded by DOE’s Office of Science—were badly hurt in the FY ’08 budget war. Because of a $93-million cut in federal funding for particle-physics programs, announced in December, both laboratories scheduled layoffs and took other emergency measures. For instance, at Fermilab “we are all taking 10 percent of our time off without pay,” Oddone says.

Oddone warns that if Congress does not restore the lost funding, the damage to U.S. particle physics could become irreversible.

The new budget proposal would restore funding for an international nuclear-fusion project and reinstate some of the President’s priorities, such as nanotechnology, information technology, and cyber security.

The proposed budgetary gains would be largely offset by pinching back elsewhere, notably at the National Institutes of Health (NIH), the second-largest federal R&D spender. The President would hold NIH’s funding flat—with not even an increase to cover inflation.

“It is disturbing that the President proposes once again to flat-line funding for the NIH,” said Robert Berdahl of the Association of American Universities in Washington, D.C., in a statement. “If approved, this will mean that, over 6 years’ time [FY ’04 through ’09], NIH’s purchasing power … has been cut by one-seventh.”

The Department of Agriculture’s R&D programs have been targeted for a major hit. For instance, the $1 billion proposed for the Agricultural Research Service programs would be a 9 percent drop from FY ’08.

NASA’s total science budget would increase by 0.9 percent, with some internal redistribution reflecting the agency’s ongoing shift away from the space shuttle program and toward the President’s stated goal of establishing a human base on the moon. Accordingly, lunar-science investments would more than double, to $105 million.

Some new Earth missions would also receive funding, including a satellite to map soil moisture and a satellite to measure ice-sheet mass as well as cloud and aerosol heights. However, other programs in astrophysics, for instance, would drop to $1.16 billion in 2009—a loss of roughly 15 percent.

The Department of Commerce, parent agency for the National Oceanic and Atmospheric Administration and the National Institute of Standards and Technology, received a 1.9-percent boost in R&D funding. About $74 million would restore a program to deploy climate sensors on satellites, and about $5.3 million would go to enhancing hurricane forecasting.

Toting up the winners and losers, overall inflation-adjusted R&D spending in the President’s budget would top this year’s appropriated funds by just 0.7 percent.

Bush’s latest and last budget proposal could spark another spending fight, according to analysts. “I don’t see any incentives for this President to compromise,” says Koizumi. He and others suspect Congress might hold off approving the FY ’09 federal budget far beyond Oct. 1, the beginning of the fiscal year—hoping for a more favorable moment with the winner of November’s presidential election.