SAN FRANCISCO — Three inmates who escaped from Alcatraz in 1962 and set off into the San Francisco Bay on a makeshift raft could have safely reached shore if they timed their escape just right, new research suggests.

If the escapees had cast off between 11:30 p.m. and midnight, the trio could have reached a beach just north of the Golden Gate Bridge as the outgoing tide slackened, researchers proposed December 16 at a meeting of the American Geophysical Union. But if the prisoners had set off before 11:30 p.m., the tide’s strong currents would have swept the raft into the Pacific Ocean, a computer reconstruction of the bay suggests.

The work has importance beyond illuminating a 52-year-old cold case, said hydrologist Oliver Fringer of Stanford University, who did not work on the project. The team’s three-dimensional reconstruction, which simulates the bay’s currents, tides and winds, will help scientists identify flood-prone areas in the region and assess the potential impacts of sea level rise, he said. 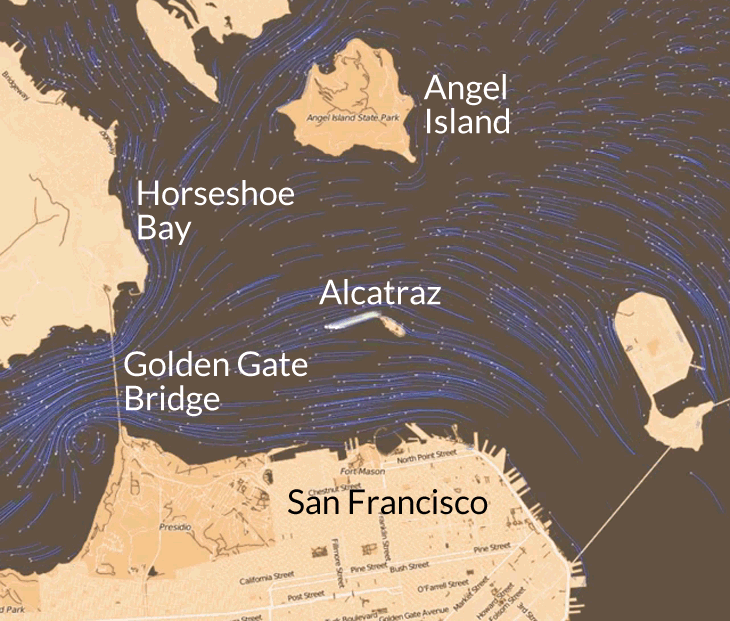 Using a simulation of San Francisco Bay, researchers charted all of the possible paths the raft used by prisoners escaping from Alcatraz could have taken around the bay, represented by white dots with blue tails.

Fringer said the team is expected to release an open-source version of its computer simulation on December 18. “This is a fun case study,” he said, “but a good model of the bay is critical to a lot of important work.”

The frigid water and strong currents surrounding Alcatraz Island gave it the reputation as an unescapable prison. On the night of June 11, 1962, bank robbers Clarence Anglin, John Anglin and Frank Morris escaped from their cells through holes they had dug using sharpened spoons. Sneaking to the water’s edge, the prisoners inflated a raft made from a patchwork of stolen raincoats and cast off into the night, never to be seen again.

Resolving the mysterious disappearance of the convicts wasn’t the team’s intention, said coastal scientist Fedor Baart of Deltares, a research institution in Delft, Netherlands. The primary goal was to assess the impacts of future sea level rise on industries lining the banks of the San Francisco Bay. Combining detailed sonar-based maps of the bay’s bottom with simulations of ocean currents and tides, the team could project how rising sea level would impact coastal flooding during storms.

The idea for reconstructing the Alcatraz escape came when one of the researchers watched an episode of the TV show MythBusters, in which the hosts attempted to re-create the prisoners’ escape. “We thought if we’re able to look into the future with our model, we should be able to look into the past as well,” Baart said.

For every 30 minutes between 8 p.m. and 4 a.m. on the night of the escape, the team simulated the release of 50 boats from a range of possible escape spots on Alcatraz. Some of the test boats drifted aimlessly with the current, while some were paddled by the prisoners in various directions. A few of the boats mimicked the presumed behavior of the prisoners, such as whether they would paddle faster if they spotted land through San Francisco’s thick fog.

Whether the prisoners reached shore or died at sea largely depends on how well they planned, Baart said. If the escapees paddled perpendicular to the outgoing tide and left shortly before midnight, they probably would have reached Horseshoe Bay near where the bay opens to the Pacific Ocean. An oar found in 1962 near Angel Island north of Alcatraz supports this conclusion; the oar could have floated over from Horseshoe Bay if the escapees discarded it into the water after they landed. Alternatively, if the prisoners paddled against or with the current, they probably would not have survived the trip. “Going with the flow was dangerous in their case,” he said.

The consideration of human behavior in the simulation came from Baart’s background as a psychologist. The Alcatraz work has inspired him to take behavior into account in more hazard predictions in the future, such as where people would construct buildings along coastlines or whether people evacuate during a storm.

Considering the human element could make hazard assessments more realistic, said oceanographer Matthew Heberger of the Pacific Institute in Oakland, Calif. “Our decisions make a huge impact,” he said. “This illustrates that we’re always dealing with uncertainty, and that human behavior is one of the most uncertain things you can imagine.”