As climate change has warmed the heights of the Rocky Mountains, the anatomy of some specialized bees has changed too, weakening their ancient partnerships with certain alpine flowers.

Two species of long-tongued bumblebees now have tongues that are 24 percent shorter on average than those in specimens from the 1960s and 1970s, says ecologist Nicole Miller-Struttmann of State University of New York College of Old Westbury. These bees do much of the pollinating in high fields of flowers, especially for unusually deep-throated flower species.

Climate change in recent decades seems the most likely explanation for the bee change, Miller-Struttmann and her colleagues argue in the Sept. 25 Science. As the temperature has risen about 2 degrees Celsius in their habitat in the last 40 years, blossoms of all kinds aren’t as common as they used to be. Greater competition for nectar favors generalist pollinators, which have shorter tongues.

Speedy tongue response to warming sounds plausible to Riccardo Bommarco of the Swedish University of Agricultural Sciences in Uppsala, who has studied pollinators in Europe. “Evolution can definitely occur quicker than we generally think,” he says.

Before this study, biologists had warned that populations of the long-tongued specialist bees are waning in spots around the world. Miller-Struttmann turned to two species from the Rockies to investigate what might be happening with their sources of nectar. Bees pick up nectar by unfolding tongues with a channel for fluids and a tuft at the end. “They suck and mop,” Miller-Struttmann explains. 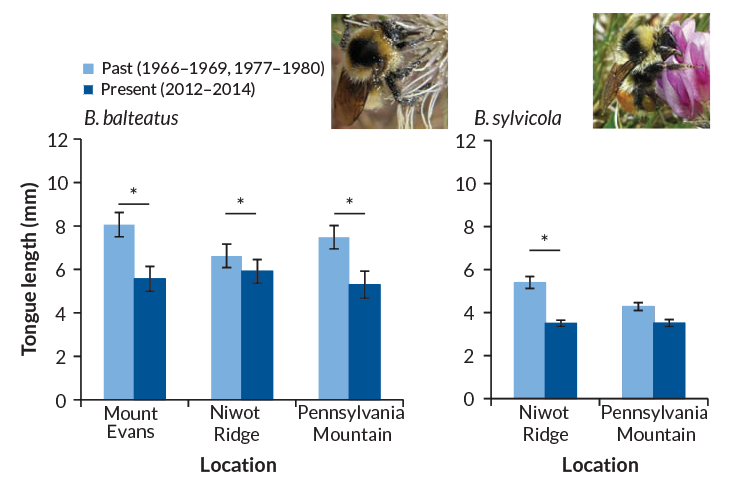 To measure the lengths of past bee tongues, she rehydrated specimens collected during two periods decades ago (1966 to 1969, and 1977 to 1980). A night in a plastic box with wet paper towels brings old bee specimens back into supple and measurable form, she says. Folding out their tongues, she found that Bombus sylvicola could extend the front of its tongue roughly 5 millimeters and B. balteatus between 7 and 8 millimeters. Bees measured in 2012 and 2014 had lost nearly a quarter of their tongue length on average, across both species.

The most important change, she and her colleagues argue, is the dwindling abundance of blooms in the warming heights, which may be drier than in the past. With fewer blossoms of any species, shallow and deep alike, bees have to sample flowers more widely than they did previously to get enough nectar to prosper, she suspects.

Ecologists have long observed that shorter-tongued bees tend to be generalists, economizing on energy required for extreme tongue structures if they aren’t that important. So expanding the range of flowers that bees visit favors shorter tongues, Miller-Struttmann says.

Biologists have previously fretted about climate change upsetting the timing of blooms and their pollinators. The shrinking-tongue bees may be the first case of warming climate knocking apart the anatomy of a pollination partnership, Miller-Struttmann says. Bees unable to reach the full depths of specialist flowers and buzzing among a greater variety of flower species may not pollinate the specialists as well as they once did.