The spiral disk of the Andromeda galaxy, the Milky Way’s neighbor, is just a tiny part of a much larger entity. The visible part of the galaxy is embedded in a tenuous halo of gas about six times as large as previously measured, researchers report in the May 10 Astrophysical Journal.

The halo is roughly 2 million light-years across — about 10 times as wide as the disk of stars — and extends nearly halfway to the Milky Way. If our galaxy has a similarly sized halo (which is tricky to measure for astronomers stuck inside the Milky Way), then the galaxies might be on the verge of touching (SN: 7/14/12, p. 10), says astrophysicist Nicolas Lehner of the University of Notre Dame in Indiana. Roughly 30 percent of Andromeda’s ordinary matter (excluding the invisible “dark matter”) is locked away in this gassy bubble, Lehner and colleagues report.

“It’s great stuff,” says Jason Tumlinson, an astronomer at the Space Telescope Science Institute in Baltimore. “Andromeda fits really well with trends we’re seeing.” As galaxies wind down their star-forming factories, their halos appear to thin out. Andromeda’s halo dovetails with this trend, suggesting that the galaxy is evolving from a once vibrant stellar nursery to one that’s more sedate.

Unlike the halo of dark matter that holds Andromeda together, the halo of gas is “the galactic fuel tank, waste dump and recycling center,” says Tumlinson. The halo recaptures gas exploded out of dying stars and supplies gas to build more.

To probe the halo, the researchers selected 18 quasars, the radiant cores of distant galaxies, that sit well beyond Andromeda. Atoms in the halo intercept some of the quasar light, allowing Lehner’s team to probe the otherwise invisible gas.

For most galaxies, astronomers are lucky to find one quasar that illuminates the halo. Andromeda’s proximity to Earth, however, makes it a perfect laboratory for studying halos in much greater detail. “Andromeda could be a template for understanding this kind of thing for all galaxies,” says Tumlinson. 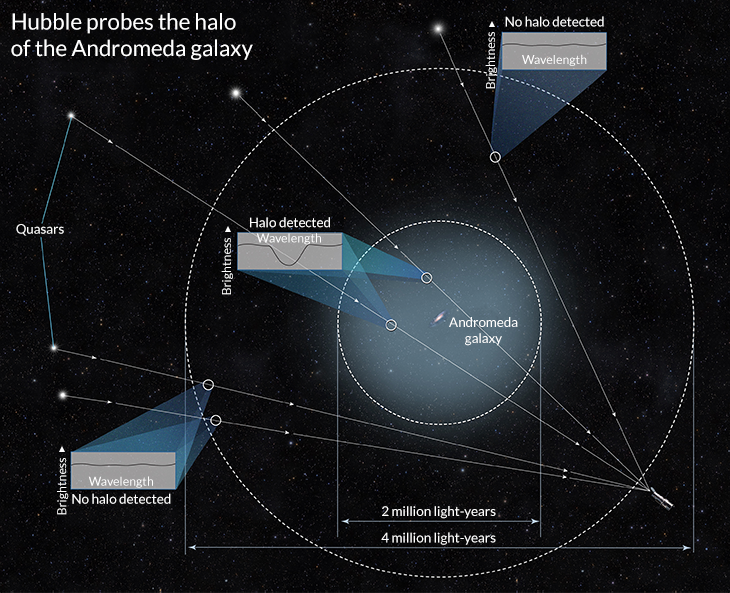