Forget about wires, silicon and electricity. Physicists have developed a new type of circuit that is little more than a puff of gas dancing in laser beams. By choreographing the atoms of this ultracold gas to flow as a current that can be controlled and switched on and off, the scientists have taken a step toward building the world’s first “atomtronic” device.

Atomtronics is a young, small and mostly theoretical field based on the idea that atoms in unusual quantum states of matter may provide an alternative to the tried-and-true electron for making useful devices. The field’s proponents have drawn up blueprints for atomic versions of many traditional electronic components — from wires and batteries to transistors and diodes.

At the Joint Quantum Institute in Gaithersburg, Md., graduate student Anand Ramanathan and his colleagues hope to use an ultracold gas called a Bose-Einstein condensate to make atomtronic sensors. In an upcoming paper in Physical Review Letters, the team reports creating this gas by cooling sodium atoms suspended in magnetic fields. The researchers then trapped the atoms in a pair of crossed laser beams and further chilled the atoms to less than 10 billionths of a degree above absolute zero. The two beams also shaped the condensate that formed at these low temperatures into a flattened doughnut with a radius of about 20 micrometers.

“A lot of care was required in how we created the trap,” said Ramanathan. “We had to make it as smooth as possible to make sure that imperfections played a minimal role.”

A second pair of lasers transferred energy to the doughnut to start it rotating. Because atoms in the condensate behave as a single, coherent quantum particle, such a ring of the substance doesn’t speed up or slow down gradually — it jumps between different speeds, much like a blender would if it could change settings instantaneously. The scientists chose the lowest setting for their ring, about one revolution every second.

Because the condensate also happens to be frictionless, this ring should, in theory, rotate forever. Limited by technical difficulties, the research team kept it going for about 40 seconds, the lifetime of their condensate.

“This is the first time that someone has actually made a ring-shaped condensate,” said team member and physicist Gretchen Campbell. “We’re hoping to use this condensate in much the way that superconductors have been used to make improved devices and sensors.”

Her first idea for a useful device was inspired by superconducting quantum interference devices, commonly known as SQUIDs. These devices reveal the presence of very weak magnetic fields by detecting sudden changes of current in semiconductor loops.

Using a similar principle, Campbell’s team believes that Bose-Einstein condensate could provide an extremely sensitive rotation sensor. They added a “weak link” to their condensate ring — a barrier created by a blue laser that could speed up or shut down the flow. Theoretically, if the condensate were kept still and the barrier attached to a rotating sensor, the barrier would cause a sudden jump in current at certain rotation speeds.

The team’s approach to creating an atomtronic device is only one of half a dozen being pursued in laboratories around the world. “They’ve added another tool that we can start to use to build up the atomtronics toolbox,” said Dana Anderson, a physicist at the University of Colorado at Boulder.

All of these pioneers hope that, for certain applications, atoms will prove to be more interesting than electrons.

Backstory
BIRTH OF THE ULTRACOOL 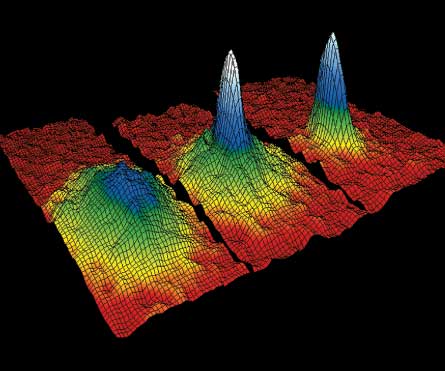 Physicists Satyendra Nath Bose and Albert Einstein proposed in 1924 that large numbers of atoms could be chilled to the point that they joined together in a single quantum state, bringing subatomic effects to a scale accessible by laboratory experiments. But it wasn’t until 1995 that scientists made a Bose-Einstein condensate, using lasers to carefully cool rubidium-87 atoms down to temperatures less than a millionth of a degree above absolute zero. The 2001 Nobel Prize in Physics celebrated this accomplishment, which was also achieved using sodium atoms. This image shows the distribution of atomic velocities in a rubidium gas just before (left) and after (center and right) the formation of a condensate.