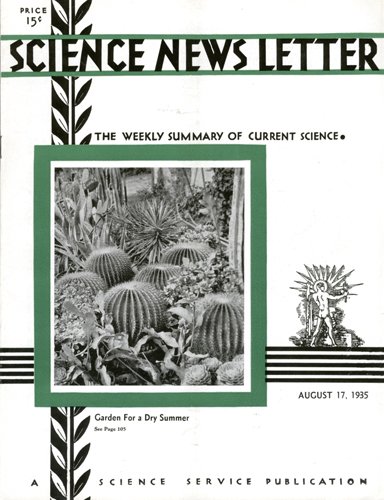 NEITHER DROUGHT NOR HEAT CAN DAMAGE CACTUS BEDS

Droughty summers of the recent past may have had something to do with the rapid rise in favor of cactus gardens. For cacti certainly are excellent things to have on the place when the sun is hot and the wind is dry and there is no rain in sight. They turn their thick hides and bristling spines against an unfriendly world, and sit tight to await better times.

The interesting cactus vista reproduced on the front cover, from a grouping at the famous Missouri Botanic Gardens in St. Louis, gives an idea of what can be done with these desert plants. The big round cacti, which contribute so much character to the picture, are of the “Golden Barrel” variety.

The present high horticultural favor of cacti, however, is not without its disadvantage. Commercial “cacticians” are raiding the desert to an ever-increasing extent, robbing it of its choicest specimens over widening areas. Botanists and conservationists are beginning to express considerable concern and to demand legal protection, lest the desert become a desert indeed.

Echo-sounding apparatus, now widely used on ships to make continuous records of bottom depth, can also be turned to good account in the fisheries industry, in locating large schools of commercial fish.

Oscar Sund, well-known Norwegian fisheries scientist, reports (Nature, June 8) on four instances when the apparatus on the research vessel Johan Hjort disclosed the presence of large numbers of codfish, spawning in midwater. The records demonstrated clearly the hitherto unsuspected fact that when codfish lay their eggs they pay no attention to the bottom, but maintain a position at a uniform depth beneath the surface.

With late summer hot weather comes another 9-days’-wonder to press, radio, and newsreel. Animals are being “frozen to death” and subsequently resurrected by laboratory miracles. In Hollywood, 180 persons are said to have offered themselves as human subjects for one of these super-chilling experiments. Maybe there was a hot wave in the California foothills at the time.

Although the animals used are of a higher zoological order than have figured in previous experiments of somewhat similar nature, the wonders now being reported are not wholly without precedent. At the bottom of the animate scale, bacteria and protozoa are notorious for their resistance to extreme cold. They even stand prolonged immersion in liquid air without apparent prejudice to their subsequent reproductive powers.

It has been suggested, by speculative philosophers, that evolution started with one-celled immigrants of this kind, floating in somehow, from some unknown elsewhere, through the unimaginable cold of outer space.

Higher in the scale, similar freezings have been inflicted on fish and frogs, with at least short-time survival after thawing.

Of course, all such creatures are not really frozen to death. If they were dead, they would stay dead, no matter how carefully thawed out. They are really in a state of low metabolism or life-process, known as “inanition” to scientists. With life-fires thus banked, organisms can exist for surprisingly long periods without visible signs of life.

Hibernating animals, like bears, woodchucks, ground-squirrels, and turtles, display the phenomena of inanition in quite typical form. Their muscles are limp, their breath has practically ceased, there is no readily detectable heartbeat, their other organs seem to be without function. Their temperatures, even in the case of warm-blooded animals, drop to very little above that of the surrounding air. You can shake them, poke them, stick pins in them, without getting any response. Only a gradual warming-up brings them to life again.

Inanition is an organism’s response to extreme conditions against which it has no other defense. It is a feigning of death to defeat real death.

We do not commonly think of man as a hibernating animal, and he is not, under normal conditions. Yet he also is capable of invoking voluntary inanition in times of stress. Prof. Sergius Morgulis, of the University of Nebraska College of Medicine, tells of a hibernation-sleep resorted to by Russian peasants in famine times. They huddle together on the tops of their great flat stoves, by families, even by whole villages. Covered with all the fur coats available, drawing warmth from the stove and from each other, they conserve their life energies to the utmost, and with only a few unavoidable interruptions, wait for spring in practically continuous sleep.