The first published recordings of sounds from any larval fish reveal that gray snappers (Lutjanus griseus) only about a month old and a centimeter long make small noises at night, says Claire Paris of the University of Miami, in Florida. Their chatter can be heard both at sea and in tanks in the laboratory. What the sounds do for the fish remains to be seen, but they might help larvae cluster with their own kind as the fish journey through the open ocean in the dark, Paris and her colleagues speculate October 1 in Biology Letters.

Biologists have proposed that the underwater calls of adult fish can aid in keeping schools together, says fish sensory ecologist Dennis Higgs of the University of Windsor in Canada, who wasn’t part of the new research. Yet he doesn’t know of other recordings of such young fish making sounds.

The traditional view of larval fish doesn’t give them credit for doing much more than drifting “at the whims of currents,” he says. Their parents give them a risky start in life, broadcasting sperm and eggs into the sea. The resulting specks of fertilized tissue, if they don’t get eaten, can spend weeks in the open ocean before arriving at habitats such as seagrass beds or coral reefs.

Larvae of gray snappers (one shown) make noises at night. Below are clips recorded in laboratory tanks to reduce background sounds. 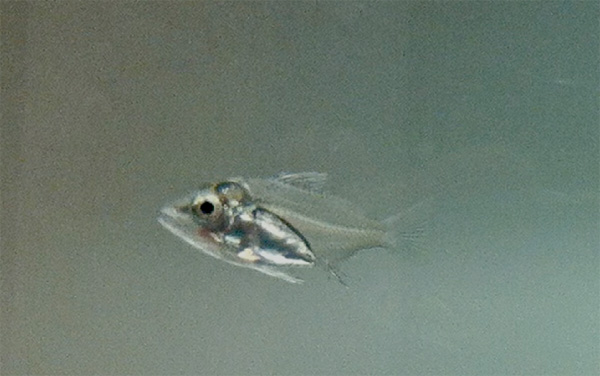 Knocks of a gray snapper larva

Growls of a gray snapper larva

In recent years, however, the traditional view of haplessly drifting larvae “has broken down to some extent,” Higgs says. At least some larvae can exert control over their journeys, rising, sinking or in some cases moving fast enough horizontally to challenge a swim-along scientist ( SN: 1/15/11, p. 18 ). Also, certain fish larvae steer toward clues such as odors or sounds that distinguish healthful habitats from harsh ones ( SN: 9/20/14, p. 20 ).

The discovery that larvae themselves make sounds was an accident, Paris says. She was studying environmental cues under natural conditions and created a floating mesh chamber that held a larval fish under a camera as seawater washed through. To see how habitat sounds might entice larvae, she added an underwater microphone to the setup.

The hydrophone picked up fishlike sounds from inside or beside the chamber, which gave the research team “an aha moment,” says study coauthor Erica Staaterman, also at Miami. Scientists knew somewhat older juvenile fish and adults make noises, but researchers hadn’t previously picked out larvae’s noises in the underwater soundscape. Fish sounds in general don’t have the wavering melodic intrigue of whales singing. Instead, fish noises are “thumpy and knocky and growly, and sound like things banging around,” she says.

To see whether the larvae really made the recorded sounds, researchers put the little fish in tanks in a sound-proof chamber. The resulting recordings sounded chirpier but still plausibly like lower-pitched knocks and growls of adults.

The discovery “adds a very cool new layer to our understanding of the importance of noise for fish,” says Steve Simpson of the University of Exeter in England. Unfortunately, the finding also suggests a way, he says, “that anthropogenic noise from small boats, shipping and construction might interfere at a critical life stage” for fish.