When food gets scarce, African birds called fork-tailed drongos (Dicrurus adsimilis) watch for a meerkat or other forager to find desirable prey such as a plump grub. The drongo calls out an alarm as if a predator were approaching. The forager often drops its prize and dashes for cover. Then the drongo swoops in and steals lunch.

If drongos fake an alarm too often, victims could learn to ignore it, says Tom Flower of the University of Cape Town in South Africa. Drongos get around this liars’ dilemma by borrowing other species’ alarm sounds and varying what noise they make in the scam, Flower and his colleagues report in the May 2 Science.

The researchers studied drongo deception in the arid Kalahari region of South Africa, at the site where the TV show Meerkat Manor was filmed. Researchers there recorded drongos, each of which made 9 to 32 kinds of alarm calls. 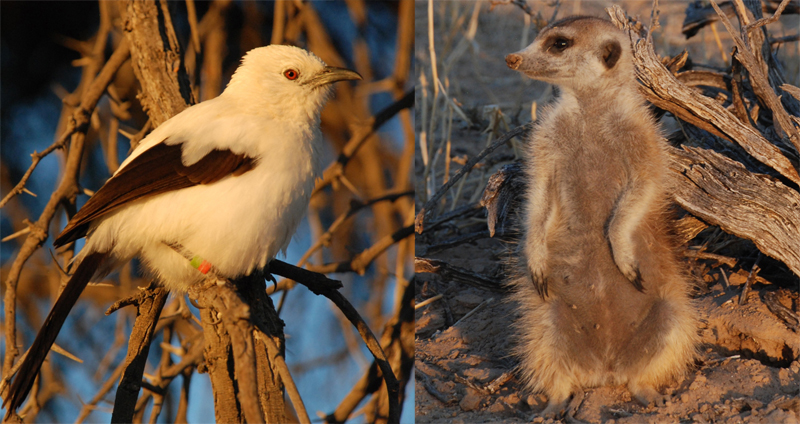 Pied babblers (left) and meerkats are among the targets of drongos’ false alarm tricks. A drongo can mimic several dozen warning sounds of other animals that live in the Kalahari. Photos and audio: Courtesy of T. Flower

Listen to a real meerkat alarm:

A drongo mimics the meerkat alarm:

The sounds unique to drongos are “sharp and harsh and grating,” Flower says, like the noise “when you stamp on a can.” But the species can also make 45 more sounds that mimic other animals’ warning calls, such as the piping or barks that meerkats give when spotting danger. Drongos often do serve as reliable sentries, giving honest warnings of danger.

But when the birds hustle to steal food, they mimic alarms of other species more than 40 percent of the time — and use the victim’s own species’ alarms more often than another target’s. The mimicry works. The researchers played various recorded false alarms for birds called pied babblers, a frequent target of the drongos’ fraud. Mimicked alarm calls of the babblers or of another bird distracted the babblers for longer than plain drongo alarms.

Variety also works. The same call lost some of its power to fool the babblers on the third repitition, the researchers found. But switching that third phony alarm to a different kind of alarm sent babblers fleeing as swiftly as ever.

Analyzing 688 drongo attempts at theft in the Kalahari revealed that the master tricksters are switching it up in the wild. Compared with a drongo that succeeded in scaring away a forager with one kind of alarm call, a bird that failed is more likely to switch to a different call for the next attempt. And switching made the next attempt more than four times as likely to succeed as not switching.

Documenting flexible deception in mimicry like the drongos’ is extremely unusual, says behavioral ecologist Rose Thorogood of the University of Cambridge, who has studied cuckoos tricking other bird species into caring for young cuckoos. Plenty of organisms lie and cheat for a living, but they face limits on their foolery that drongos have pushed back.