Howie Choset is a roboticist, but his team’s creations bear little resemblance to C-3PO or R2-D2. Instead, Choset finds inspiration in nature — specifically, snakes.

“A lot of people have this notion that robots are modeled after people,” says Choset, of Carnegie Mellon University in Pittsburgh. But the animal kingdom is full of organisms that use different types of locomotion, he says.

The snake robots in Choset’s laboratory can slither, roll, swim and climb straight up. These slender machines, usually built from a series of metal pieces containing motors and electronics, can also squeeze into tight spaces.

Choset (below) enjoyed motorizing toys as a kid, and in high school he built a robot that could maneuver around obstacles. He first encountered snakelike robots in his graduate adviser’s lab at Caltech and realized that the machines could navigate a greater range of environments than typical robots, such as small openings, uneven surfaces and poles. “If you have to cross a field, swim a moat, burrow through a little hole in a fence and climb a pole, there’s no other robot that can do all those things,” says Choset. He now has his own menagerie of serpentine bots, with the latest red, white and blue version (see below, “How snakebots groove”) dubbed “Uncle Sam.” His team wrestles with challenges such as developing algorithms to control the robots’ many independent joints and figuring out the right gaits to overcome specific obstacles. To ascend a pole, for instance, the robot must twist into a helix and roll upward. 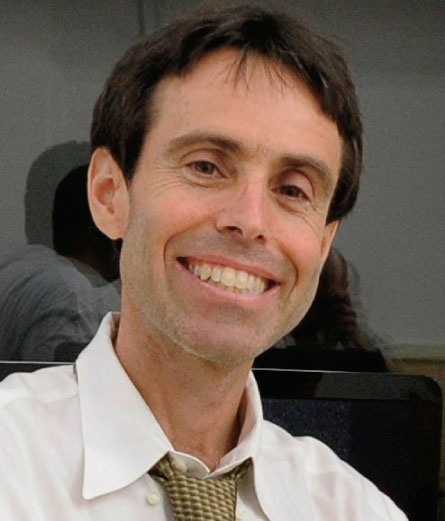 Choset hopes that snakebots could one day help rescue workers find victims in collapsed buildings after an earthquake or terrorist attack. Over the last couple of years, he has run tests of his team’s robots in rubble at a rescue-worker training site in Texas called Disaster City. And last year, Choset visited Egypt to explore the possibility of sending snake robots into archaeological sites to search for artifacts.

His lab has also made a snakebot that may enable less invasive heart surgery. Instead of opening a patient’s chest, a surgeon could guide the robot to the heart through a small hole, then thread a surgical tool through the robot.

How snakebots groove
A snakelike form gives robots versatility in how they move. Choset and his team have designed snakebots that mimic a variety of styles of motion seen in nature. 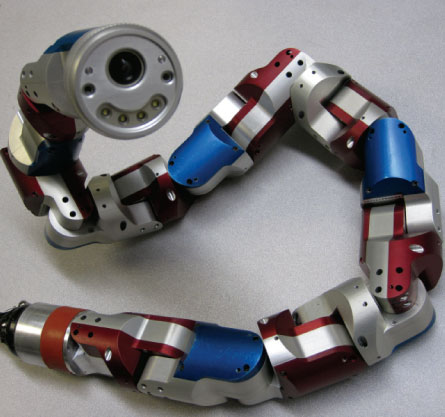 Crawl A snakebot inches across flat surfaces by moving its body up and down in a wavelike pattern.

Squeeze To fit through tight spaces, such as a pipe, snakebots twist and spiral forward like a corkscrew.

Climb A snakebot can wrap its body around a tree trunk, or any vertical pole, and roll itself up and down.

Swim A buoyant snakebot can slither across a body of water like a real snake does, provided it’s wearing protective waterproof skin.

A video of snakebots from Howie Choset’s lab shows off their skills at climbing legs, skittering up walls and even swimming.
Credit: H. Choset

A snake robot climbs a tree and looks around using the camera in its “head.”
Credit: H. Choset