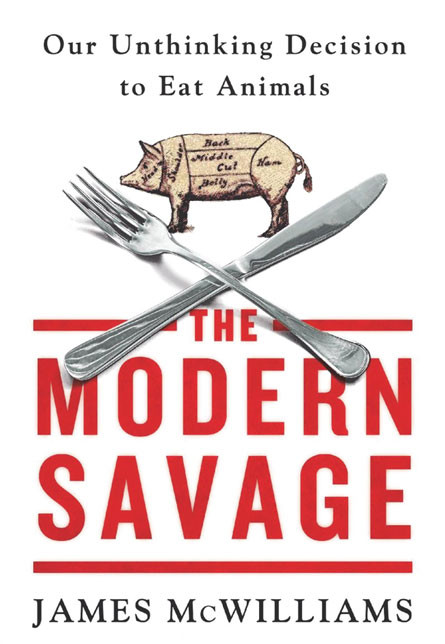 In today’s zeitgeist, “factory farm” has become a profanity. For many consumers, the phrase conjures animal cruelty, with livestock crammed into pens and cages, barred from fresh air and sunlight and given feed loaded with drugs.

In revolt, many conscientious meat-eaters have adopted the mantra “know your food.” The goal of this movement is to eat animals that have been treated humanely — given a “good life” — before their slaughter. Such livestock get a more “natural” upbringing, free to roam small-scale farms or get individual attention in backyard pens. But are “organic” and “cage free” products really better than industrial alternatives?

Not necessarily, writes historian James McWilliams, a vegan and an animal rights advocate. In The Modern Savage, he explores the pitfalls of small-scale and do-it-yourself meat production. Armed with gruesome anecdotes, he argues that amateur farmers can be incompetent. Animals on small farms may suffer from preventable diseases and injuries, botched slaughters and suburban predators such as dogs.

McWilliams also questions the idea that nonindustrial farms offer animals a more natural upbringing. Many organic farmers start off staunchly opposed to nose rings for their pigs, he points out. Common jewelry on industrial farms, these rings make it painful for a pig to follow its natural piggy tendency to root. Yet, he writes, those same organic farmers can quickly cave after Wilbur makes a mud pit of pasture and flower beds alike.

Very little data exist on the severity or prevalence of problems on small farms. (One exception: Studies have repeatedly found higher levels of germs and disease on small and organic farms than at industrial outfits.)

To McWilliams, any amount of animal suffering is problematic. In the book, he goes even further, arguing that there’s an ethical contradiction in wanting a good life for animals destined to be killed in their prime for food. Animals on nonindustrial farms, he writes, are “simultaneously, an object to be killed and a subject to be nurtured.”

He contends that the most ethical way to combat factory farming is to stop eating meat. The author has a strong point of view and The Modern Savage is not a data-driven report, but the book offers a thought-provoking critique of popular, often unquestioned, meat production methods.

Buy The Modern Savage from Amazon.com. Sales generated through the links to Amazon.com contribute to Society for Science & the Public’s programs.