WASHINGTON, D.C. — Hunger turned horrifying among Colonial-era residents of Virginia’s Jamestown settlement. An analysis of a partial skull from a teenage girl unearthed last summer indicates that she was cannibalized after she died, scientists reported May 1 at the Smithsonian Institution’s National Museum of Natural History.

This unfortunate girl, dubbed Jane by the team that studied her remains, gruesomely confirms several colonists’ written accounts of last-ditch cannibalism at Jamestown’s walled fort during the winter of 1609 to 1610. Historians refer to those months as Jamestown’s “starving time,” when sickness, starvation and a siege by neighboring Powhatan Indians nearly wiped out the settlement.

Jane represents the only skeletal evidence of cannibalism in the Americas during colonial times. “We don’t think Jane was alone in being cannibalized at Jamestown,” said historian James Horn of the Colonial Williamsburg Foundation.

Jane’s partial skull and right shin bone were excavated in a structure’s cellar by a team led by William Kelso, chief archaeologist of the Jamestown Rediscovery Archaeological Project. The cellar had become a refuse pit by 1610. Aside from Jane, researchers found military equipment, pots, seashells, and the remains of horses, dogs and other animals in the cellar.

After observing that Jane’s skull had probably been chopped in two, Kelso called in a group led by Smithsonian anthropologist Douglas Owsley to analyze the girl’s remains.

Closely spaced cuts in Jane’s forehead, which can be made only on a motionless body, are consistent with the young girl having been dead before the cuts were made, Owsley said. After that failed attempt to open Jane’s skull, her body was positioned face down. A person wielding a small axe or cleaver then split her skull in half with four forceful chops.

Cuts and puncture marks on the left side of the cranium and the lower jaw resulted from someone using a knife in a sawing motion to remove the brain and tissue from the face and throat, including the tongue.

“The person who did this was very hesitant and had no experience at this type of activity,” Owsley said.

Jane’s shin bone was chopped off near the knee joint, in a cut similar to a traditional butchery technique, he added.

The cause of Jane’s death can’t be determined from her remains, which represent about 10 percent of her complete skeleton.

Jane probably reached Jamestown in August 1609 on one of six storm-damaged ships that had been part of a larger fleet carrying supplies and settlers from England, Horn said. Most of the desperately needed food had spoiled on board. Settlers’ attempts to get food from the Powhatan led the tribe to attack and surround the Jamestown fort. As winter set in, the settlers became desperate. Horses, dogs, rats, snakes and even boiled boots were eaten, according to written accounts. As a last resort, dead people were consumed.

Only 60 of 300 settlers survived that brutal winter, and new colonists had crossed the ocean to Jamestown by spring.

Jane now returns from that tumultuous time, thanks to a facial reconstruction led by Owsley. CT images helped researchers assemble a 3-D model of the girl’s skull. A group of sculptors and artists then collaborated with the scientists to create a likeness of Jane. Tooth development and the growth stage of a partial knee joint put Jane’s age at about 14 years. 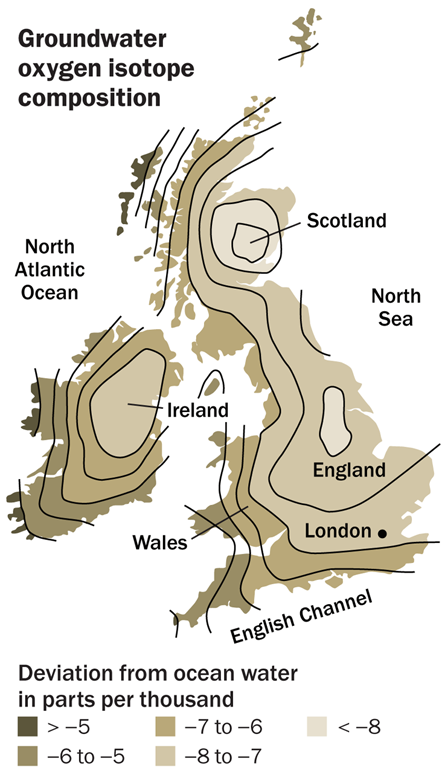 In addition to providing information about a person’s death and its aftermath, human remains can reveal where and how someone lived. Measuring the ratio of different forms of oxygen in Jane’s teeth indicates that she probably spent her childhood in coastal southern England. Oxygen comes in different forms called isotopes, each with a different number of neutrons in the nucleus. The oxygen in surface water and groundwater contains varying ratios of the two most common isotopes, oxygen-16 and oxygen-18, depending on the water’s temperature, distance from the ocean, altitude and other factors. Since the oxygen in a growing person’s teeth comes almost entirely from drinking water, we all carry around in our mouths a record of the oxygen-18/oxygen-16 ratio in the place where we grew up. Jane’s teeth suggest she grew up in an area of moderate oxygen-16 enrichment. Combined with historical information about the origins of early Jamestown settlers, that information allows researchers to say with a fair degree of certainty that she came from the southern coast of England.