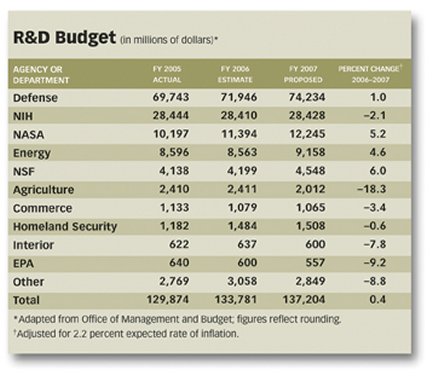 The $2.77 trillion spending plan includes $137 billion for R&D in 2007. While this number is up more than $3 billion from the spending estimate for 2006, the actual gain when adjusted for the predicted inflation rate of 2.2 percent is only 0.4 percent. “In general, the science budgets this year are flat, except for increases in selected high-priority agencies,” says John H. Marburger III, director of the federal Office of Science and Technology Policy.

The American Competitiveness Initiative, announced in the President’s State of the Union address last month, seeks to bolster basic and applied research in fields that are at the center of such advances as the Internet, fiber optics, and satellite-telecommunications systems. The three agencies that Bush has selected as crucial for the initiative are the National Science Foundation (NSF), the Department of Energy’s Office of Science, and the National Institute of Standards and Technology (NIST).

NSF’s entire 2007 budget of $6.02 billion would be part of the competitive initiative, and $4.5 billion of that sum would be put toward R&D. NSF Director Arden L. Bement Jr. says that he expects the increased funding to support as many as 500 new research grants primarily in the physical sciences. Most NSF programs to strengthen K-12 education in science, engineering, and math would also increase.

“As other countries begin to emulate our innovation systems, they are going to become more competitive, and that could put us at a serious disadvantage,” Bement says. “So, we have to take new concepts and put them to work.”

As part of the initiative, the Department of Energy’s Office of Science budget would rise from $3.6 billion in 2006 to $4.1 billion. The office would spend half the money on research and half for operating its scientific facilities, such as the Relativistic Heavy Ion Collider at the Brookhaven National Laboratory.

NIST would receive a $72 million increase in funding for research at its facilities.

But the increases related to the initiative are offset by cuts at other research agencies, notes Kei Koizumi, director of the R&D Budget and Policy Program at the American Association for the Advancement of Science in Washington, D.C.

Biomedical research, for instance, would take a hit in 2007, as it did in 2006. The National Institutes of Health would gain $18 million, but that translates into a 2.1 percent decrease in support when adjusted for inflation. NIH estimates that fewer than one out of every five grant applications will be funded in 2006 and 2007. “That’s strikingly low,” says Koizumi, noting that about one of every three grants succeeded in 2001. Furthermore, the Department of Agriculture and the Environmental Protection Agency were scheduled for severe cuts.

At other agencies, however, “if you are a non-biomedical scientist applying for a grant, then the news looks pretty good, especially in the physical sciences and engineering,” says Koizumi.

As in other recent budgets, the largest slice of the R&D pie would go to the Department of Defense. They would get an additional $2.3 billion, which is a 1 percent increase over 2006. The R&D budget for the Department of Homeland Security, which enjoyed an increase of roughly 21 percent last year, would see a 0.6 percent decrease in 2007.

NASA R&D would collect $851 million, or 5.2 percent more than it did last year, for a total of $12.2 billion. The agency’s overall budget, however, would cut science and aeronautics programs to make up for a $3 billion shortfall in other areas. That shortfall comes in part from finishing the assembly of the International Space Station, and building a vehicle that would take astronauts back to the moon and pave the way for a venture to Mars.

The overall lack of growth in federal R&D is not surprising, considering the President’s intention to reduce domestic spending, says Koizumi, and “in that situation, an increase in one area has to come out of another area.”