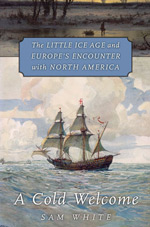 Many people may be fuzzy on the details of North America’s colonial history between Columbus’ arrival in 1492 and the Pilgrims’ landing on Plymouth Rock in 1620. But Europeans were actively attempting to colonize North America from the early 16th century onward, even though few colonies survived.

As historian Sam White explains in A Cold Welcome, most early attempts were doomed by fatally incorrect assumptions about geography and climate, poor planning and bad timing.

White weaves together evidence of past climates and written historical records in a comprehensive narrative of these failures. One contributing factor: Explorers assumed climates at the same latitude were the same worldwide. But in fact, ocean currents play a huge role in moderating land temperatures, which means Western Europe is warmer and less variable in temperature from season to season than eastern North America at the same latitude.

On top of that, explorations occurred during a time of global cooling known as the Little Ice Age, which stretched from the 13th to early 20th centuries. The height of exploration may have occurred at the peak of cooling: Starting in the late 16th century, a series of volcanic eruptions likely chilled the Northern Hemisphere by as much as 1.8 degrees Celsius below the long-term average, White says.

This cooling gave Europeans an especially distorted impression of their new lands. For instance, not long after Spanish explorer Sebastián Vizcaíno landed in California’s Monterey Bay in December 1602, men’s water jugs froze overnight — an unlikely scenario today. Weather dissuaded Spain from further attempts at colonizing California for over a century.

A Cold Welcome is organized largely by colonial power, which means findings on climate are repeated in each chapter. But White’s synthesis of climate and history is novel, and readers will see echoes of today’s ignorance about the local consequences of climate change. “Human psychology may be both too quick to grasp at false patterns and yet too slow to let go of familiar expectations,” White writes.

Buy A Cold Welcome from Amazon.com. Science News is a participant in the Amazon Services LLC Associates Program. Please see our FAQ for more details.