Scientists using Earth-based experiments to detect particles of dark matter might now know why they keep coming up empty-handed: There may be no dark matter in the solar neighborhood — at least, not within 13,000 light-years, reports a study appearing in an upcoming issue of the Astrophysical Journal.

Though dark matter, a mysterious substance different from ordinary, visible matter, supposedly makes up more than 80 percent of the matter in the universe, the new work suggests that the solar system lives in a dark matter desert. That’s a problem, because most scientists think the Milky Way galaxy is embedded in a large halo of dark matter.

If the results hold, scientists will have to reconsider what sort of shape that dark matter halo takes, although it’s unlikely to cause any major cosmological upheavals.

“This doesn’t mean that dark matter does not exist,” says study coauthor Christian Moni Bidin, an astronomer at the Universidad de Concepcion in Chile. “The result is only that dark matter is not where we expected it.”

Dark matter explains many things, including the rotation speed of the Milky Way. Its outer reaches spin more rapidly than expected based on the amount of mass sequestered in visible stars. Scientists have deduced that unseen matter, probably in the form of exotic subatomic particles, engulfs the speeding galaxy, exerting a gravitational force that accounts for the rapid rotation.

Since dark matter is invisible, scientists can’t directly observe it in space. Instead, they infer its presence by looking for its gravitational effect on things like stars, gas, and light from distant galaxies. For the new work, a team in Chile went hunting for changes in the paths of stars crossing the sky, sinuous indicators that masses of the dark stuff lay nearby.

More than a year ago, astronomers studied the motion of roughly 400 red giant stars that hovered far above the galactic plane in the vicinity of the solar system. Now, the team in Chile has calculated the amount of matter needed to explain the stars’ movements. That total equals the mass of stuff they can see.

It’s a challenging measurement, and one that may not have been done right, says Chris Flynn, an astronomer at Swinburne University of Technology in Melbourne, Australia. When Flynn applied the team’s method to a simulated galaxy with known quantities of dark matter and stars, it failed to detect the simulated dark matter. “My best bet is that something has gone astray in the measurements or analysis,” says Flynn, a referee of the paper. “I was able to show to my own satisfaction that there was a problem of some kind in the method, but couldn’t diagnose where the problem really is.”

Moni Bidin says future observations of millions of stars should help sort out what’s going on. Right now, he’s hesitant to infer too much from the results, suggesting mainly that scientists trying to capture dark matter particles on Earth might be fighting a losing battle. If the results hold, there are broader consequences for the distribution of dark matter around the Milky Way.

Instead of being spherical, the dark halo might be elongated and shaped more like a cigar, a squashed beach ball, or a rugby ball (kind of like a bloated American football). A cigar or rugby ball oriented perpendicularly to the galactic plane would fit the absence of dark matter near the sun. “But models and theories have great trouble explaining the observation of this shape,” Moni Bidin says.

Astronomer Sukanya Chakrabarti notes that theories describing the distribution and evolution of dark matter on galactic scales are incomplete. Perhaps, she notes, reworking those theories will make it easier to generate something like a cigar-shaped halo, piercing the heart of the galaxy. “We understand the skeletal structure of the universe quite well,” says Chakrabarti, of Florida Atlantic University in Boca Raton. “But if you zoom in to one galaxy, and try to understand the guts of galaxy evolution, there are many physics things we haven’t put in.”

Some scientists have already suggested that the Milky Way’s halo is not spherical and is instead more like a squished beach ball — a shape consistent with the new results, says astrophysicist David Law at the University of Toronto in Canada. Law defined the halo’s shape by looking at how the Milky Way’s satellite galaxies behave. His measurements, published in 2010, suggested a squished sphere, with the distribution of dark matter dropping off in the solar neighborhood. That kind of shape is consistent with these results, Law argues. But he, too, notes that the new results should be approached with caution.

“I don’t think it’s quite time to say that there is no dark matter in the solar neighborhood at all,” Law says. “That isn’t necessarily the most likely explanation.”

Back Story | Searching for WIMPs 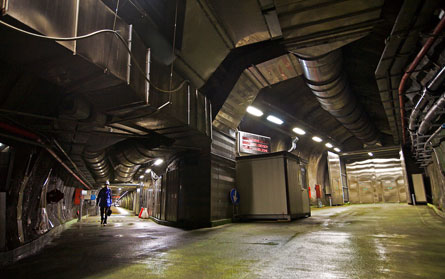 The two tunnels at the entrance of the underground Gran Sasso Laboratory in Italy, where the XENON100, CRESST and DAMA experiments are housed. Credit: INFN/S. Schiavon

Physicists suspect that dark matter takes the form of weakly interacting massive particles, called WIMPs. As the name suggests, WIMPs don’t generally mingle with ordinary matter. But their sheer abundance should make them detectable to experimenters on Earth. Scientists trying to directly detect dark matter particles generally bury detectors deep underground — to avoid contaminating background signals from cosmic rays and other sources — and use a variety of substances capable of registering a collision with a WIMP. At least one team has found evidence for a WIMP-wind — or seasonal fluctuation in dark matter particles, the product of Earth’s orbit carrying it through the galactic dark matter halo. But those reports are inconsistent with other experiments’ negative results, and the WIMP sightings to date have been less than definitive, leaving scientists puzzled. So far, no Earth-based experiment set up to capture WIMPs has produced a confirmed detection.

CDMS, the Cryogenic Dark Matter Search, looks for WIMPs using germanium and silicon crystals chilled to nearly absolute zero. It’s located in an old mine shaft hundreds of meters beneath Soudan, Minn. In 2009, it announced the detection of two possible WIMP particles, a finding that might have been due to background interference and so remains unconfirmed.

CoGeNT, in the same Minnesota cavern as CDMS, uses a wedge of germanium in its detector. In 2010, the team reported hundreds of potential WIMP particles, still unconfirmed. In 2011, researchers described suspected evidence for a seasonal fluctuation in dark matter, which is also still subject to debate.

XENON100, located beneath Gran Sasso mountain in Italy, relies on vats of liquid xenon. In 2011, researchers reported finding no evidence of WIMPs.

DAMA , also at Gran Sasso, uses a sodium-iodide detector. First in 1998 (and again in 2008 and 2010), the DAMA team reported detecting a seasonal dark matter fluctuation that remains unconfirmed by other groups.