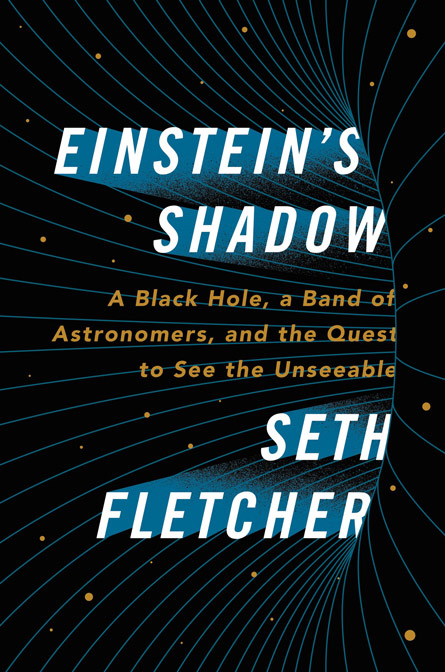 Right now, a ragtag team of astronomers, assembled from institutes across the globe, may be peering in wonder at the first picture of a black hole’s shadow. The quest to create such an image has involved a massive level of scientific coordination, combining data from telescopes at eight observatories scattered from the South Pole to Hawaii to the Atacama Desert in Chile. In Einstein’s Shadow, journalist Seth Fletcher provides a twisting narrative of the project’s inception and how it grew into a worldwide effort.

Called the Event Horizon Telescope, or EHT, the project is “the biggest telescope in the history of humanity,” EHT director Shep Doeleman of the Harvard-Smithsonian Center for Astrophysics says in the book. EHT unifies far-flung radio telescopes through a technique called very long baseline interferometry, which involves combining the light waves spotted by each telescope to determine how the light adds up, through a process called interference. Using this technique, EHT can achieve resolution equivalent to picking out a doughnut on the moon. That extreme capability is what’s needed to capture a picture of EHT’s main target: the gigantic black hole at the center of the Milky Way.

EHT captured its first data in 2006, but has yet to produce an image of a black hole. After adding more telescopes and improving the technology, in April 2017, EHT took data aimed at capturing the silhouette of the Milky Way’s central black hole (SN Online: 4/5/17). Those data are still being analyzed.

No one has ever directly seen a black hole, so scientists still debate the details of what black holes are like. A boundary known as an event horizon is thought to exist at the edge of each black hole. This border, beyond which nothing can escape (SN: 5/31/14, p. 16), is what EHT is attempting to image.

Close to the event horizon, physics becomes utterly strange, with space and time warped by the black hole’s huge mass. There, Einstein’s general theory of relativity, which describes gravity, clashes with quantum mechanics, the theory of physics on small scales. Scientists are still unsure how to reconcile the two theories (see Page 23), but an image of the black hole’s boundary could provide hints.

Einstein’s Shadow gives a feel for what it takes to image a black hole, thanks to Fletcher’s accounts of researchers scrounging for funding, pleading for telescope time and wishing for good weather. Leaders of the collaboration squabble over power and responsibilities. Observations fail due to technical difficulties. Astronomers bite their fingernails as delicate equipment is driven up a bumpy mountain road.

Telescope upgrades and malfunctions get detailed explanations in the book. Astronomy buffs will probably enjoy those passages, but others may find them a bit dull. That feeling, however, may put readers in astronomers’ shoes — science sometimes can be slow.

We won’t know what EHT saw until the team releases its results. According to Doeleman, that should happen early next year. If EHT eventually unveils a black hole portrait, the dirty and dull work that was necessary to get the project off the ground will likely be glossed over in media coverage. Einstein’s Shadow reveals parts of the scientific process that, like the Milky Way’s gigantic black hole, are usually left in the dark. That process is worth bringing to light.

Editor’s note: This story was updated October 23, 2018, to correct the description of the environment around the event horizon. Space and time are warped by the black hole’s huge mass, not gravity.