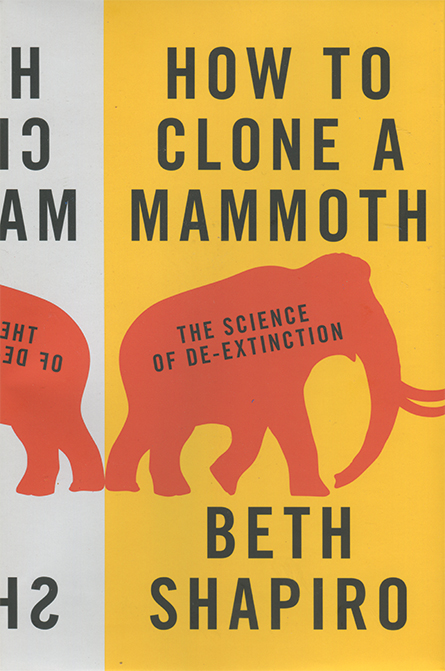 How to Clone a Mammoth
Beth Shapiro
Princeton Univ., $24.95

First, the bad news: Scientists are probably never going to resurrect authentic mammoths from bones or mummified remains. Genetic material just doesn’t survive intact for thousands of years in the Siberian permafrost. The bits and pieces of DNA that do linger in fossils aren’t enough to create a clone.

That makes the title of How to Clone a Mammoth somewhat misleading. But evolutionary biologist Beth Shapiro keeps hope alive for making a mammoth — or at least something very much like one. By tinkering with an elephant’s genome, scientists could produce a cold-tolerant shaggy beast resembling the real deal.

Shapiro’s book is a thoughtful how-to guide for the painstaking process of reviving not just mammoths but passenger pigeons and other lost species. Her aim is to separate science from science fiction by taking a critical look at proposals for bringing these animals back. She outlines the many hurdles biologists would have to overcome, including assembling the genome and finding a closely related surrogate mom.

Beyond the technical difficulties, there are also thorny ethical questions, particularly if the lab-grown animals are released into the wild, as Shapiro hopes. She is acutely aware that people are worried about reintroducing extinct species. From the potential dangers for existing ecosystems to the financial burdens of the ventures, Shapiro carefully addresses the issues scientists would have to deal with. Some difficult questions still lack answers, she says.

Amid the concerns, it’s worth considering the benefits. The return of big herbivores such as mammoths — which could till the soil underfoot and spread seeds over long distances — could transform the desolate Siberian tundra into rich grassland. By reviving certain animals, Shapiro says, scientists could revive long-gone ecosystems. That could, in turn, keep other species from following the mammoth to extinction.

Buy How to Clone a Mammoth from Amazon.com. Sales generated through the links to Amazon.com contribute to Society for Science & the Public’s programs.