Agriculture’s spread into Europe was a movement of people, not just ideas, new genetic data suggest.

Early farmers living in Sweden about 5,000 years ago carried genetic signatures of both farmers and hunter-gatherers, researchers report April 24 in Science. The findings suggest that migrating farmers bred with foragers, carrying more and more hunter-gatherer genes with them as they brought agriculture from the Middle East through Central Europe and into Scandinavia.

Not all of the foragers were brought into the farmers’ fold: At least some Scandinavian foragers resisted assimilation. These hunter-gatherers maintained a separate genetic identity and culture for at least 40 generations even though they lived only 400 kilometers from the Swedish farmers, Mattias Jakobsson, a population geneticist at Uppsala University in Sweden, and his colleagues found.

The data may help settle a long-standing debate in archaeology about how agriculture spread, says archaeologist Colin Renfrew of the University of Cambridge. One camp has viewed agriculture as primarily a spread of ideas with minimal movement of people. The other view is that farmers migrated from the Middle East, through Turkey and into Europe supplanting hunter-gatherers as they went.

Jakobsson’s group drew its conclusions by analyzing genomes from ancient farmers and hunter-gatherers from Sweden. The oldest hunter-gatherer was a man buried about 7,500 years ago in a cave on an island in the Baltic Sea — long before farming reached Scandinavia. Six other hunter-gatherers came from a nearby island and were primarily seal hunters. Their remains are about 5,000 years old and their DNA contains no trace of interbreeding with farmers. 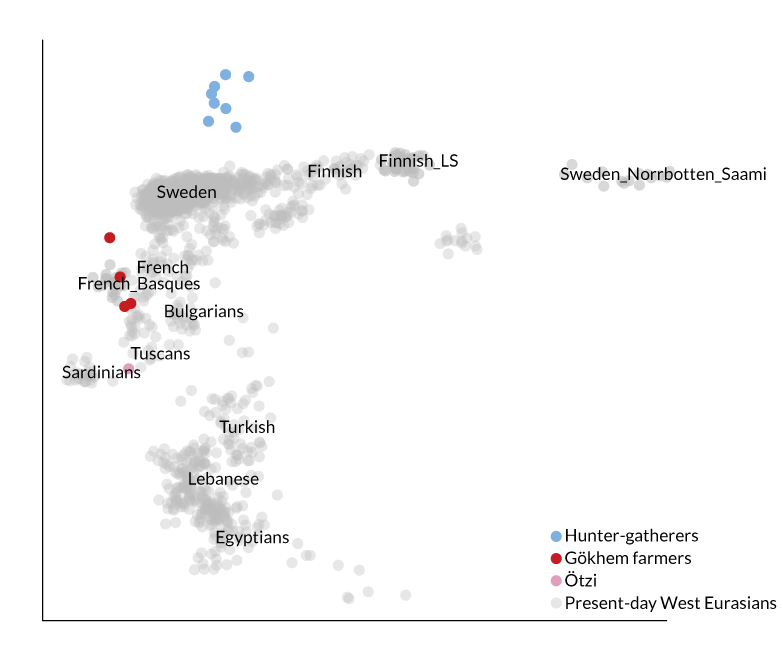 Although hunter-gatherers from Sweden (blue) lived near early farmers (red) 5,000 years ago, the two groups were genetically distinct. Modern Eurasians (gray) have a mix of hunter-gatherer and farmer ancestry, with Northern Europeans more closely resembling the foragers, and Southern Europeans the farmers. (Click image to enlarge)

Since agriculture made it to Sweden some 6,000 years ago, the data indicate that these hunter-gatherers held on to their lifestyle and remained genetically separate from the farmers for at least 1,000 years, or about 40 generations, Jakobsson says.

The farmers Jakobsson and colleagues studied had been buried in Gökhem parish on Sweden’s mainland and were about 5,000 years old. Their ancestors were probably some of the first agriculturists to bring farming to Sweden. Their DNA is a mix of Middle Eastern ancestry and the European hunter-gatherers that the migrating farmers encountered on their journey north.

The wave of migration of farmers into Europe was not like a tsunami of huge numbers of people washing suddenly over the land. Rather, the leading edge dripped slowly and steadily, with each generation “just moving down the road a bit,” by 20 or 30 kilometers, Renfrew says. This steady trickle left plenty of opportunity to interact and breed with local hunter-gatherers, a pattern that fits well with the data, he notes.

The Swedish farmers had more hunter-gatherer ancestry than did the famous 5,300-year-old Iceman Ötzi, who lived in the Alps on the border of Austria and Italy. That finding fits the idea that agriculture spread by migration and not by a transfer of ideas, Renfrew says. Southern farmers like Ötzi, since they had migrated shorter distances since leaving the Middle East, had encountered and interbred with fewer hunter-gatherers.

For the idea camp to have claimed victory, researchers would have needed to have found evidence that people who were genetically hunter-gatherers had picked up farming but hadn’t bred with agricultural groups. “That’s exactly what they don’t see,” says Renfrew.

The ancient hunter-gatherers were less genetically diverse than their farming neighbors, Jakobsson’s group found. The lower diversity probably means that the foragers lived in small bands, while the farmers supported larger groups. The farmers probably trickled into new territory, assimilated local foragers and then greatly expanded their population size.

Today, no modern Europeans are exactly like the Swedish hunter-gatherers, suggesting that their direct line died out. But hunter-gatherers did contribute to the genetic heritage of Europeans through interbreeding with farmers. People in Northern Europe today have more hunter-gatherer ancestry than people from the Mediterranean region do, the researchers found.

The work “says quite a lot about how ideas spread,” says Jakobsson. “These super-revolutionary ideas like farming quite often spread by the movement of people.” Even today, when telephones and the Internet rapidly disseminate information, he says, “We’re always head-hunting people to bring in new ideas.”