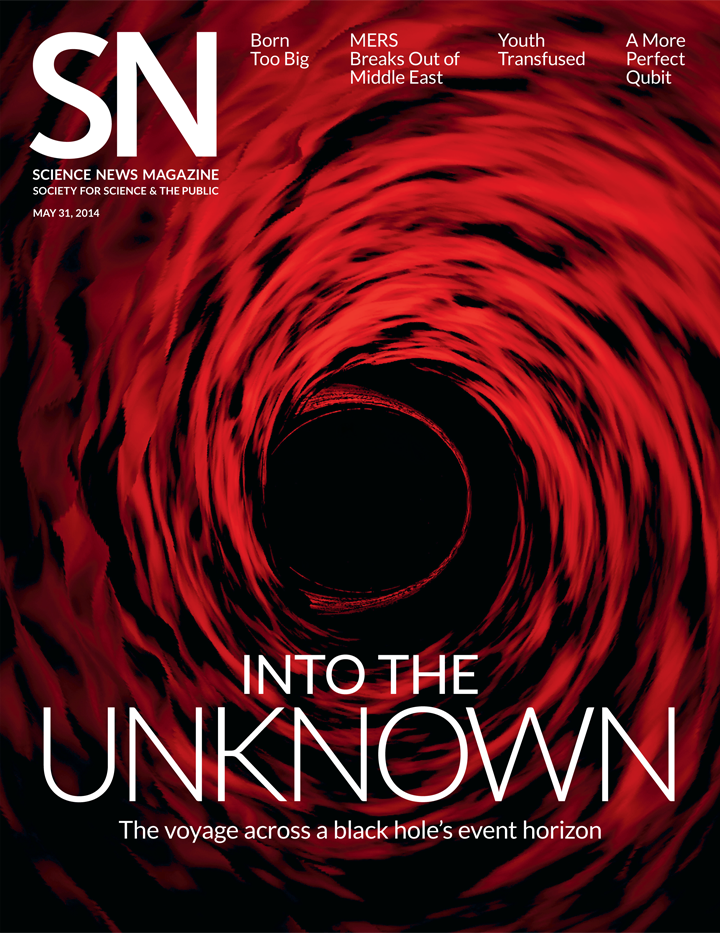 Scientists disagree about what would happen to a hypothetical astronaut who floats past a black hole’s point of no return —whether the unlucky traveler would be flash-fried or stretched into oblivion. Andrew Grant chronicled the event horizon debate in “The mysterious boundary” (SN: 5/31/14, p. 16).

On Facebook, we asked readers to speculate about the astronaut’s fate, and most sided with spaghettification. Charles Reardon saw a potential silver lining to a horrifying death in deep space: “I’d imagine that, because time outside the black hole would be moving so fast compared to the astronaut, he’d probably be watching all the stars going supernova and being reborn like a fireworks show!” Mark Cedrick De Vera jump-started a discussion about whether spaghettification would be painful, and most readers agreed that the poor spaceman would be dead before his brain knew what was happening.

For now, this is all just guesswork. “Falling into a black hole seems like a bit of a stretch!” quipped Bob Cleland.

In “Oldest flying reptile” (SN: 5/31/14, p. 5), Meghan Rosen announced the discovery of the pterodactyl Kryptodrakon progenitor, an early ancestor to some of the largest reptiles to take to the air.

Charlie Savoye said that because pterodactyls weren’t the only airborne reptiles, the title of the story was misleading. “The article itself notes that this discovery pushes back the fossil record ‘for this type of pterosaur’ by more than 5 million years; the pterosaurs as a whole — the order of extinct flying reptiles — go back significantly earlier, to the late Triassic period.”

Rosen agrees that the headline incorrectly lumped flying reptiles together. “Though Kryptodrakon is the oldest pterodactyloid pterosaur at around 163 million years old, this group of flying reptiles doesn’t include all pterosaurs, some of which lived and flew even earlier,” she says. Study coauthor James Clark, a paleontologist at George Washington University in Washington, D.C., says that the oldest pterosaurs come from the Late Triassic, making them 225 million to 230 million years old.

Scribbling down notes may help students understand lecture concepts better than typing away at a keyboard. Laura Sanders reported that students writing in longhand performed better on postlecture quizzes than their computer-using peers in “Students retain information better with pens than laptops” (SN: 5/31/14, p. 14).

The finding resonated with readers, who ruminated on the benefits of jotting things down. “Typists are famous for automatically putting down what they hear without thinking about it. A good touch-typist can type in their sleep,” wrote John Turner. “Longhand? You tend to have to engage your brain more. Handwriting takes such complex muscular effort and planning that you’re always asking yourself ‘why am I writing this and not that?’ ”

Online commenter SCstarman added, “You might appreciate the definition of a lecture given by Eric Masur in ‘Confessions of a Converted Lecturer’: ‘The lecture method is a process whereby the lecture notes of the instructor get transferred to the notebooks of the students without passing through the brains of either!’ ”

Readers online brainstormed lots of other possible factors contributing to life span, from brain size to heartbeats. And for bats, “it may be more ‘life in the slow lane’ that results in the longer life spans,” Anthony Kerwin wrote. “Not only do they hibernate, but they will use torpor, a semihibernation state, on a daily basis or during cool periods, resulting in a considerable reduction in energetic costs.”