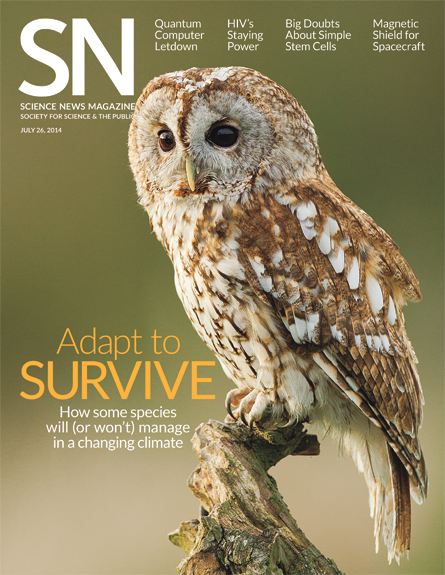 The art of science

Dazzling images of life on a cellular level now greet travelers flying into the U.S. capital, as Tina Hesman Saey reported in “Microscapes take off at D.C.’s Dulles airport” (SN: 7/26/14, p. 28). The exhibit, called “Life: Magnified,” offers viewers a glimpse of cells, microorganisms and other microscopic details at larger-than-life size.

A few fortunate Science News readers have had the chance to check out the exhibit in person. Julie Sigler recounted her experience in an e-mail: “As I strolled sleepily through the dull gray Dulles United Airlines terminal, hours early for my plane, a phalanx of colorful photos woke me. ‘Just like those I see in Science News,’ I thought. Back home a few hours later, reading through my copy of the July 26 SN, I was delighted to see an article that explained the exhibit I’d just passed!” she wrote. “I wish each photo had been labeled. If any explanation were present, I must have been still asleep as I walked past it.” 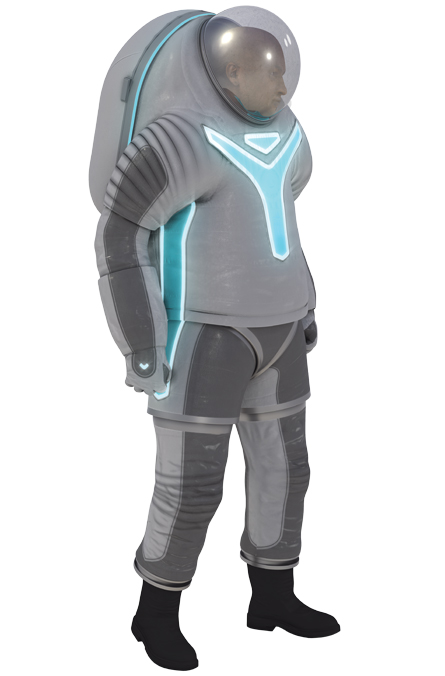 In “A suit fit for Mars” (SN: 7/12/14, p. 32), Andrew Grant unveiled new gear designed to outfit astronauts bound for the Red Planet. The technology may be cool, but readers on Twitter weren’t too impressed by NASA’s fashion sense.

“The Martians are going to laugh at us.”
@VaughnFry

“It looks like Buzz Lightyear in his later years.”
@thisisbossi

“Maybe the shorts should be a contrasting color, for that undies-on-the-outside superhero vibe. Then again, maybe not.”
@LoremIpsum00

Reader ZZTop liked the exhibit but had a problem with the location. “The exhibition space is in a corridor where you are either rushing to your gate or from it, so you never really feel like you have a chance to study the images. How about putting some art in spaces where people are still, or have a little more time?”

The trouble with triclosan

Anthony Giarratano wondered if researchers could create a sludge-processing microbe with a beefed-up defense against triclosan. “Of course, this would not resolve the issue of harmful microbes also becoming resistant to triclosan, but perhaps it could help resolve part of the problem by allowing the beneficial microbes to continue their work.” But that would just escalate an unwinnable war, argued Anthony Kerwin. “We get ourselves into these endless loops of ‘create drug, bug evolves to develop resistance, create new drug, bug evolves….’ A never-ending battle with dire, and unintended, consequences.” He added, “Perhaps a triclosan-resistant microbe could help in the short term. I still worry about those unintended consequences.”

The most efficient solution is to just ban triclosan, said conradseitz. “It isn’t particularly effective, and multiple negative studies have been piling up lately. Soap by itself washes away the bacteria and archaea anyway.”

Weighing in on birthweight

Researchers know that babies born too small can suffer health problems later in life, but new studies reveal that being too big at birth has its own risks. Nathan Seppa explored the consequences of a high birthweight, which the Centers for Disease Control and Prevention defines as more than 4 kilograms, or 8.8 pounds, in “Big babies” (SN: 5/31/14, p. 22).

In an e-mail, pregnancy researcher Sally Ann Lederman of Columbia University noted that high-birthweight babies born of naturally large parents don’t face the same added risk that babies born with extra fat do. But, she said, some studies cited in Seppa’s article didn’t make that distinction. She also took issue with the cutoff point of 4 kilograms for a big newborn. “If this idea is accepted, a great disservice will be done to American babies and their mothers,” she wrote, arguing that 4.5 kilograms is a better marker. In defense of large babies, she pointed to earlier research showing better neonatal survival, lower chance of high blood pressure and possibly higher IQ in people born big.

While researchers are still sorting out how being born heavy affects future health, Seppa notes that many of those earlier studies suggesting benefits of high birthweight were published before the obesity epidemic hit full force. Newer data, as his feature reported, show problems.